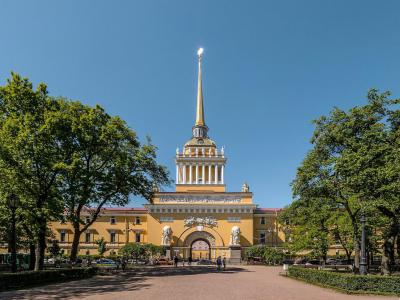 Rising over the west end of Nevsky Prospekt with its gilded 72.5 meter spire, topped by a golden weather-vane shaped as a small sail warship (Korablik), is one of St. Petersburg's most conspicuous landmarks – the Admiralty building. The former headquarters of the Admiralty Board and the Imperial Russian Navy, this is now home to the Chief Command of the Russian Federation's Navy and a naval college.

The building sits at the focal point of St. Petersburg's three main streets – Nevsky Prospekt, Gorokhovaya Ulitsa (Pea Street), and Voznesenskiy Prospekt – and was once jestingly called a "Pole Star" or "Nevsky trident".The site was chosen deliberately to be within a range of canon fire from the nearby Peter & Paul Fortress, so that the Admiralty could be destroyed if ever captured by enemy. First built in 1704 as a fortified shipyard, it provided backbone for the nascent Russian fleet. The first warship here was launched in 1706. By the time the shipyard was closed in 1844, it had churned out 262 vessels.

The tower and the metal spire with a weather-vane on top were installed in 1719. Underneath the spire there are 28 statues depicting four seasons, four elements, and four prevailing winds, as well as the goddess Isis – patroness of shipbuilders, and Urania – the muse of astronomy. Further below stand the statues of Alexander the Great, Pyrrhus, Ajax, and Achilles. A 22-meter high relief, called the Establishment of the Russian Fleet, depicts Neptune, the god of sea, handing over his trident to the Russian Emperor, Peter the Great.

In 1977, when the spire was gilded, a special box was installed inside the ball beneath the weather-vane, containing draft of the Soviet Constitution.

Tip:
Check out the giant fountain in the park in front of the Admiralty.