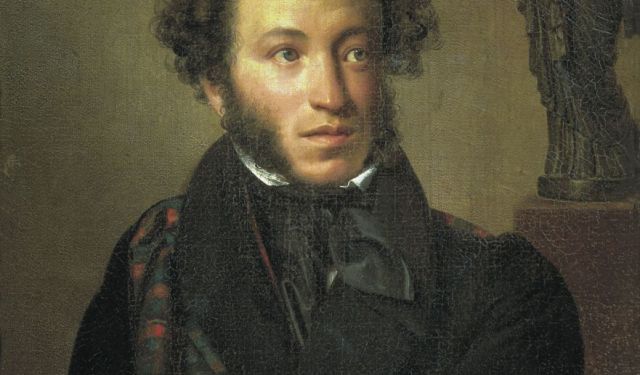 Image by Alex Bakharev on Wikimedia under Creative Commons License.

Many world-famous Russian writers and poets lived in Saint Petersburg. All of them described this beautiful city in their works. We offer you an unforgettable walking tour around the museums devoted to some of the most outstanding figures in Russian Literature. Do not miss the opportunity to see places of Saint Petersburg where Pushkin, Blok, Dostoevsky and others lived and created their masterpieces.
How it works: Download the app "GPSmyCity: Walks in 1K+ Cities" from iTunes App Store or Google Play to your mobile phone or tablet. The app turns your mobile device into a personal tour guide and its built-in GPS navigation functions guide you from one tour stop to next. The app works offline, so no data plan is needed when traveling abroad.

The Vladimir Nabokov House Museum pays homage to one of the greatest novelists, poets, and short story writers of the 20th century. The author of Lolita lived the first 18 years of his life in this house.

The first floor of the museum is reserved for the life and works of Nabokov while the upper two floors are occupied by editorial offices of the Nevskoe Vremya. The house did not survive the ravages of time or history. The only original elements that remain are the stained glass windows. The museum collection was rebuilt from donations of Nabokov’s friends and family. One of the most stunning displays is the drawings of his butterflies. In addition, visitors will enjoy the many photographs, paintings, Nabokov’s prince-nez and Scrabble set, manuscripts, and other works.

The museum also hosts seminars, a summer school, conferences, artistic exhibitions, and Nabokov specific exhibitions. A library is available for those who wish to know all things Nabokov.

Image by Alex Bakharev on Wikimedia under Creative Commons License.
Sight description based on wikipedia
2

The first hotel on the site was established by Napoleon Bokin in 1840, a three-story structure known as Napoleon's. Many Russian great poets, writers, and artists have stayed at the Angleterre Hotel. Leo Tolstoy was a frequent guest. The hotel was completely rebuilt from 1886–89, with a fourth floor added and the interiors reconstructed. At this time, the name was changed to Hotel Angleterre, meaning 'Hotel England' in French. It became famous after poet Sergei Yesenin hanged himself in the hotel on 28 December 1925.

While at Angleterre Hotel, it is worthwhile to visit its neighboring Hotel Astoria, opened in 1912. Hotel Astoria was built to host tourists visiting Russia for the Romanov tercentenary, a huge celebration of 300 years of Russian imperial rule in May 1913. The luxurious hotel was used during the celebrations to house guests of the imperial family, and was afterwards popular with the aristocracy.

After the Russian Revolution, the Hotel Astoria housed members of the Communist Party. Lenin spoke from its balcony in 1919. During World War II, the hotel served as a field hospital during the Siege of Leningrad. Adolf Hitler reportedly planned to hold a victory banquet in the hotel's Winter Garden. He was so convinced Leningrad would fall quickly that invitations to the event were printed in advance.

Writer Mikhail Bulgakov spent his honeymoon at Hotel Astoria in 1932 and is said to have written parts of "The Master and Margarita" in room 412.
Image by Ctac on Wikimedia under Creative Commons License.
Sight description based on wikipedia
3

The monument of Vasily Zhukovsky, one of the founders of Russian romanticism in literature, is located in the Alexandrovsky Garden. It was inaugurated in 1887. Author of the monument is sculptor V. Creitan. The sculpture is made of bronze and red granite.
Image by Andrew Butko on Wikimedia under Creative Commons License.
4

The Pushkin Apartment Museum is where the author of 'The Queen of Spades' lived the last four months of his life. It is also where he died after his fatal duel with his brother-in-law Dantes. The apartment is located on the Moika Embankment near the Nevsky Prospekt.

Although the gallery is a recreation of Pushkin’s living quarters, many of the author’s personal items are a part of the collection. The study alone contains over 4,000 books in European and Oriental languages. The museum also contains lithographs, watercolors, engravings, portraits of Pushkin’s friends, his death mask, a lock of his hair, and the waistcoat Pushkin was wearing at the time of his duel.

Two memorials are held each year by the museum. The first memorial remembers the anniversary of the author’s death. At 2:45 pm, the moment when Pushkin’s heart stopped beating, a moment of silence is observed. The second memorial, Pushkin Petersburg, commemorates the birth of Pushkin.

Why You Should Visit:
You may find yourself crying along with all the Russians in the room for a man who died in the 1830s. Well worth a visit if you love literature.

Tip:
A little dexterity might be needed to stay in front of or behind the groups of Russian school kids and be aware you need to purchase an additional ticket to be allowed to use your camera/phone.

Alexander Pushkin monument stands in the center of Square of Arts. It was inaugurated in 1957. The statue was made by sculptor M. K. Anikushin and was cast in bronze. The pedestal was made of red granite. Pushkin is sculpted in motion, his head is raised and his face expresses inspiration.
Image by Ana Paula Hirama on Flickr under Creative Commons License.
Sight description based on wikipedia
6

The Anna Akhmatova Museum in Fountain House pays homage to the acclaimed writer of 'Requiem', 'Belaya Staya', and 'Poem Without a Hero'. The museum is located in the southern wing of the former Sheremetev Palace. Akhmatova was a prolific and talented writer who suffered greatly under the Soviet system.

Akhmatova was born Anna Gorenko in Odessa, Ukraine, in 1889. In 1910, she married fellow poet Nikolai Gumilyov. Soon after marriage, Akhmatova began to publish her poetry. The Russian Revolution had a major impact on the poet’s life. Her former husband, Gumilyov, was executed. Her son was imprisoned, and her third husband died in a Siberian camp. In addition, she was heavily monitored by the police and her work banned. Akhmatova died in 1966 in Leningrad.

The museum focuses on honoring the day-to-day life of the author as well as honoring her literary accomplishments. Many personal belongings are available for viewing. Photographs, recordings of the author’s voice, books, and manuscripts from the author and her friends, are some of the items you will see at the house.

The museum serves as a cultural center for the community and exhibitions occur frequently. Patrons will enjoy literary readings, presentations, concerts, art festivals, and conferences on Anna Akhmatova. The museum averages 30,440 visitors per year and contains over 50,000 items in its collection.

Why You Should Visit:
Small and very friendly museum; gives you the feeling of what was living in the city in the years before and during the WWII in a privileged position.
The ambient of each room offers the music of the period, original furnishing, paintings & manuscripts.

Tip:
Don't forget to take a tour or an audioguide (the latter is available once you get upstairs to the museum – not at the same place you buy your ticket).

The Dostoyevsky House Museum is dedicated to illustrating the life and works of Fyodor Dostoyevsky, author of 'Crime and Punishment', 'The Idiot', and 'The Brothers Karamazov'. One of the most influential writers of the 19th century, Dostoevsky lived in the apartment from 1878 to 1881.

Dostoevsky's was born in Moscow on October 30, 1821 to Mikhail and Maria Dostoyevsky, hospital workers. The family lived in an apartment on the hospital grounds. It is said that Dostoevsky's interactions with hospital patients were the reason for his lifelong interest in those less fortunate than himself. This empathy was frequently illustrated in the author’s works.

In 1841, his first two works, 'Mary Stuart' and 'Boris Godunov', were published. In 1846, 'Poor Folk' was released to critical acclaim. Soon after the release of the masterpiece, Dostoyevsky was exiled to Siberia for four years for being part of the Petrashevsky Circle intellectual group. Prison had a major influence on the author and his future works. 'The House of the Dead', 'Notes from the Underground', 'Crime and Punishment', 'The Idiot', and 'Devils' were all created during this period. The last of these great works was 'The Brothers Karamazov'. When Dostoyevsky died in 1881, thousands attended his funeral and mourned the passing of a great literary hero.

Why You Should Visit:
The staff are polite, the price is fair, the rooms are lovingly recreated and the information provided by the audioguide is super comprehensive and very engaging.

Tip:
If you visit, check out the farmers market that is on the same side of the street between the museum and the metro station. It's fun to shop as the locals do!

Opening Hours:
Tue - Sat: 11am-6pm; Wed: 1–8pm; closed on Monday and the last Wednesday of each month
Image by Paramecium on Wikimedia under Creative Commons License.
Sight description based on wikipedia