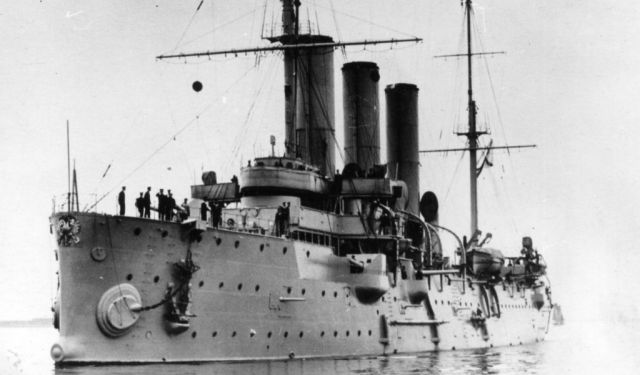 Image by BezPRUzyn on Wikimedia under Creative Commons License.

In the early 20th century Russia endured several revolutions waged against the Tsarist autocracy. The old regime fell and gave rise to a new formation, the Soviet Union. All the Russian revolutions took place in Saint Petersburg. Take this tour and discover the traces of Russian revolutions that had effect on the course of history of Russia and the entire world.
How it works: Download the app "GPSmyCity: Walks in 1K+ Cities" from iTunes App Store or Google Play to your mobile phone or tablet. The app turns your mobile device into a personal tour guide and its built-in GPS navigation functions guide you from one tour stop to next. The app works offline, so no data plan is needed when traveling abroad.

The Cruiser Aurora is a famous vessel that allegedly fired the first shot that launched the Revolution. The ship was constructed in 1897 by the New Admirateisky Shipyard and went into service in 1900. It was one of the biggest ships at its time of construction. It weighs 7,600 tons, is 416 feet long, and 55 feet wide. It is moored in front of the Nakhimov Naval Academy north of the Neva River.

The ship became a museum in 1956. The museum features over 500 documents, photographs, and objects that illustrate the ship’s illustrious history. The museum is closed the last Wednesday of each month. Tours of the underwater cruiser machine boiler are also available. Twenty-eight million people have visited the Cruiser Aurora since 1956.

Why You Should Visit:
The ship is almost brand new as it has been renovated in 2016. Not a lot of information in English, but there are enough interesting photos and artifacts in the museum below the deck to understand the most important historical facts.


Image by Michael Gwyther-Jones on Flickr under Creative Commons License.
Sight description based on wikipedia
2

Best known as the terminal that Vladimir Lenin used to return to Russia from Germany to start the 1918 Revolution, the Finlyandsky Rail Terminal is a major terminal in St. Petersburg that provides a link to Finland and other Scandinavian countries. Lenin rode into St. Petersburg on engine #293 disguised as a railway worker. Previously, Lenin had to flee to avoid persecution during the July Days riots.

The previous station even contained a pavilion for the Tsar and his family. The terminal building is impressive and large and has a number of conveniences for its passengers. A cafeteria, bank, ticket office, waiting room, and several retail stores are just some of the comforts customers can enjoy while waiting. In the 1950s, the current station was demolished and replaced with a modern structure. An estimated 12 million passengers travel the terminal each year. One cannot miss the impressive statue of Lenin across the street from the terminal.
Image by zakgollop on Wikimedia under Creative Commons License.
Sight description based on wikipedia
3

The palace was the location of the Duma in 1905. It was also the site where the provisional government was formed in 1917. And lastly, it was also the site where the first and last Constituent Assembly met in 1918. Currently, the palace is closed to the public and not available for tours.
Image by Aleksander Razumov on Wikimedia under Creative Commons License.
Sight description based on wikipedia
4

The Lenin Memorial Museum is housed in a structure that used to contain the Smolny Institute for Noble Maidens. The building, built from 1806 to 1808, was one of the first educational institutes for women. It was at the Smolny where young girls were made into ladies. But, this is not why the building is important. The museum is located in a building that is a major part of Russian history.

During the October 1917 Revolution, the Smolny became Lenin’s temporary residence and then the headquarters for the local communist party. In 1927, a statue of Lenin was installed in front of the building. The statue designers were Vasily Kozlov, Vladimir Shchuko, and Vladimir Gelfreikh. In addition, Sergi Kirov, an important Bolshevik leader was assassinated at this location. In 1991, the Smolny became the seat of the city mayor and the city government.

The museum was established in 1992. The Smolny Photo/Document Exhibit, First Soviet Government Exhibit, and Days of the Siege Exhibit are some of the displays that remember the building’s history. Patrons will enjoy viewing Lenin’s office and living quarters, the assembly hall in which Lenin spoke, as well as the former school for the girls. The gallery is one of the few Lenin museums still in existence. An average of 62,000 people per year visit.
Image by George Shuklin on Wikimedia under Creative Commons License.
Sight description based on wikipedia
5

5) Apartment Museum of the Alliluevs

Although the apartment is an important part of Russian history because of Stalin and Lenin, it is actually more famous for being the home of Stalin’s tragic wife. An average of 10,000 patrons visits each year. Over 187 items are available for viewing. Only group visits are allowed.
Image by Peterburg23 on Wikimedia under Creative Commons License.
6