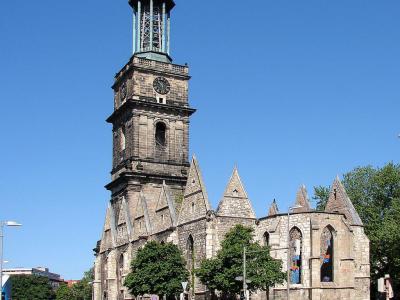 The Gothic-style Aegidien Church was built in 1347. It sits on the location of a 12th-century Romanesque church. Hanover's 16th century Reformation began in Aegidiean Church. In the early 1700s, a Baroque facade was added to the church's steeple. In 1826, Georg Ludwig Friedrich Laves remodeled the church's interior.

In 1943, the church was destroyed by World War II bombs. The church was left in ruins with only its outer walls intact. The church was not rebuilt after the war, rather it today functions as a war memorial. In 1959, Kurt Lehmann designed and installed a monumental sculpture called Humility.

The outer walls feature many Baroque epitaphs, including one dedicated to Susanna Magdalena Oldekop, who died as a child in 1648.

A relief known as the Siebenmannenstein shows seven praying men who allegedly sacrificed themselves to save the town. The men are known as "Hannover's Spartans," who died during an attack on Dohren Tower in 1480. The Siebenmannenstein relief is a copy. The original can be seen in the Hannover Historical Museum.

The contemplative Schattenlinie artwork features a white stone line that capture's the church's shadow. This artwork is a symbol of life and death, and of light and shadows.

Hiroshima, Japan, is Hanover's sister city. Hiroshima donated a peace bell to Hanover, and it is now located in the Aegidien Church's tower. It is rung every year on Hiroshima Day which is August 6th.
Image Courtesy of Wikimedia and H. Helmlechner.