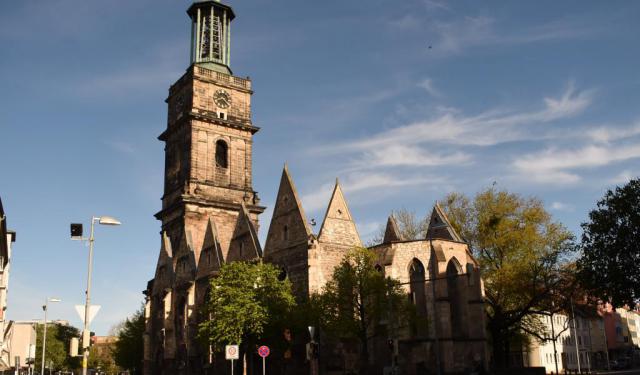 Established on the south bank of the river Leine, Hannover began as just a small village of ferrymen and fishermen. Around the 14th Century many churches and basilicas were built here. Today we can still witness these beautiful constructions, as they have remained intact all this time. Take this self-guided walking tour to visit the main religious edifices in Hannover.
Image Courtesy of Wikimedia and Bärbel Miemietz.
How it works: Download the app "GPSmyCity: Walks in 1K+ Cities" from iTunes App Store or Google Play to your mobile phone or tablet. The app turns your mobile device into a personal tour guide and its built-in GPS navigation functions guide you from one tour stop to next. The app works offline, so no data plan is needed when traveling abroad.

The Gothic-style Aegidien Church was built in 1347. It sits on the location of a 12th-century Romanesque church. Hanover's 16th century Reformation began in Aegidiean Church. In the early 1700s, a Baroque facade was added to the church's steeple. In 1826, Georg Ludwig Friedrich Laves remodeled the church's interior.

In 1943, the church was destroyed by World War II bombs. The church was left in ruins with only its outer walls intact. The church was not rebuilt after the war, rather it today functions as a war memorial. In 1959, Kurt Lehmann designed and installed a monumental sculpture called Humility.

The outer walls feature many Baroque epitaphs, including one dedicated to Susanna Magdalena Oldekop, who died as a child in 1648.

A relief known as the Siebenmannenstein shows seven praying men who allegedly sacrificed themselves to save the town. The men are known as "Hannover's Spartans," who died during an attack on Dohren Tower in 1480. The Siebenmannenstein relief is a copy. The original can be seen in the Hannover Historical Museum.

The contemplative Schattenlinie artwork features a white stone line that capture's the church's shadow. This artwork is a symbol of life and death, and of light and shadows.

Hiroshima, Japan, is Hanover's sister city. Hiroshima donated a peace bell to Hanover, and it is now located in the Aegidien Church's tower. It is rung every year on Hiroshima Day which is August 6th.

Market Church was initially built in the 14th century. It was built in the North German brick gothic style and is Germany's southernmost example of this unique architectural style.

The church's tall western tower symbolized Hannover's wealth and power. The tower is one of Hannover's most recognizable landmarks. The tower has 11 bells. The Bell of Christ and Peace is Lower Saxony's largest bell and reserved for special occasions.

The church's interior features a carved wooden altar that dates to the late 15th century. The altar's front depicts the Passion of Christ. The altar's back shows scenes from the lives of Saint George and Saint James, the church's patron saints.

The church's roof and naves were damaged by World War II bombs in 1943 and were rebuilt in 1952.

A giant pentagram on the church's western tower is one of its most dramatic elements. In addition, a hexagram surrounds the tower's clock. These symbols were used by ancient pagans and then adopted by early Christians. The pentagram was used to symbolize the epiphany.

Why You Should Visit:
Of course, not a Catholic church, or it would be decorated with gold from floor to ceiling, but still worth seeing if only to ascertain that a church is not meant for the accumulation of wealth.
Beautiful surroundings with great neighboring cafés, too!
Image Courtesy of Wikimedia and H. Helmlechner.
4

The Neustädter Kirche is an Evangelical Lutheran Church located in the suburb of Neustadt Calenberger. The official name is Neustädter Hof- und Stadtkirche St. Johannis zu Hannover (St. John's Church of the court and the city in the New Town at Hanover).

It is an important example of a baroque style church. It is thought the church, which was built in the years 1666-70, was designed by notable Venetian architect Jeronimo Sartorio. A medieval chapel of St. Mary had been the original structure on the site. Mathematician and philosopher Gottfried Wilhelm Leibniz and Field Marshal Carl August von Alten are buried here.

The church is known for its church music, performed in service and concert by the Kantorei St. Johannis (St. John's chorale), and serves as a venue for concerts, for example in the context of the Expo 2000 and the Kirchentag. It houses a "Spanish organ", suitable for early Baroque music, in collaboration with the Hochschule für Musik und Theater Hannover.
Image Courtesy of Wikimedia and AxelHH.
Sight description based on Wikipedia.
5

St. Clemen's Basilica is the mother church of the Catholic diocese of which Hannover is part. It is dedicated to Saint Clement of Rome.

Construction started in 1712, and finished in 1718. This was the first Roman Catholic church to be built in Hanover since the Reformation, when the Kingdom of Hanover became Protestant.

The church was almost totally destroyed during the Allied bombings in 1943 during World War II, as Hanover and other major cities were major targets for strategic bombing in an effort to cripple the Nazi regime. Reconstruction began in 1946, and the completed church was dedicated on 24 November 1957. On 12 March 1998, Pope John Paul II made the church a Minor Basilica.

It's easily distinguished from other buildings in the city due to its unusual shape. Built in Venetian baroque style, it is also often referred to as the "St. Peter of the North". Its services attract not just community members, but also many visitors to the city of Hannover from other parishes in the region and further afield.
Image Courtesy of Wikimedia and Christian A. Schröder (ChristianSchd).
Sight description based on Wikipedia.