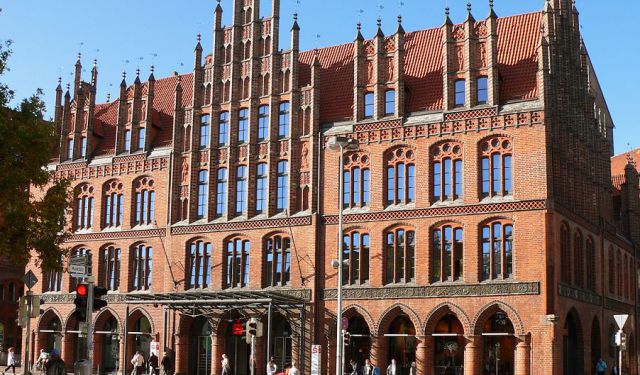 Even though some may find Hannover rather new looking, the city in fact has a long and eventful history. As a crucial transportation hub, Hannover couldn’t escape Allied bombing during World War II; what used to be a grand city was turned into the rubble – with 90% of the local buildings destroyed. Yet, despite the bombing and ensued reconstruction, many pre-war architectural gems have survived.

Today Hannover is a lively city, with a mix of classical and renaissance architecture and a cool vibe that is so easy to enjoy. Architecture buffs in particular will find a great deal to explore and see here. If you're one of them, there are a few architectural landmarks you would want to fill your itinerary with, namely:

Neues Rathaus (New City Hall) – a castle-like structure built in the Eclectic style, featuring a unique elevator that climbs 50 meters along the dome, following its contours, to an observation deck; the most known sight of the city and an absolute must-visit;

Leineschloss (Leine Palace) – the Neoclassical palace, now the seat of the Landstag (parliament) of Lower Saxony; the oldest section of the building dates back to 1636; a victim of WWII bombing, it was rebuilt in 1957-1962;

Leibniz House – originally built in 1499 but destroyed in a 1943 air raid; waited 40 years for its restoration, with the recreated facade remaining true to the original;

Anzeiger-Hochhaus (Anzeiger High-Rise) – one of the four Expressionist high-risers preserved from the 1920s; the building escaped serious damage during WWII due to its contemporary steel frame design.

To make your trip to Hannover a culturally exciting one, filled with memories to last a lifetime, take this architectural tour and see some of the city's most impressive buildings.
Image Courtesy of Wikimedia and Axel Hindemith.
How it works: Download the app "GPSmyCity: Walks in 1K+ Cities" from iTunes App Store or Google Play to your mobile phone or tablet. The app turns your mobile device into a personal tour guide and its built-in GPS navigation functions guide you from one tour stop to next. The app works offline, so no data plan is needed when traveling abroad.

New City Hall first opened in 1913 and was dedicated by Emperor Wilhelm II. The city director proudly told the Emperor that the impressive building was paid for in cash. The city had paid over ten million marks for the construction.

New City Hall is a stunning building that emulates a castle and features eclectic-style architecture. New City Hall sits on the Leine river and looks spectacular at night as its lights reflect in the water.

New City Hall's dome is 97.73 meters (320.6 feet) high and offers views of the Harz mountain range from its observation platform. The dome features a unique lift that climbs 50 meters (160 feet) at a 17-degree angle. The original lift operated from 1913 to 2007 before being replaced by a new lift.

New City Hall was damaged when American forces bombed the city during World War II. In 1946, officials proclaimed the German state of Niedersachsen from the hall.

In addition, visitors are welcome to enjoy an elegant meal at the Garden Hall bistro.

Tip:
Pay a few euros and take the elevator to the dome. With its glass floor, the view up and down is brilliant! Once you emerge from the shaft you have to take several spiral staircases to the very top of the dome. Be prepared to be blown away by the wind and by the incredible views of Hannover itself. Finally, you can have a casual lunch or tea in the beautifully appointed restaurant.


Image Courtesy of Wikimedia and Thomas Wolf.
Sight description based on Wikipedia.
2

Wangenheim-Palais, or Wangenheim Palace, is the seat of the Lower Saxony Ministry of Economic Affairs. It previously served as the residential palace for George V, the last king of Hannover. Afterward, from 1863 to 1913, it was the town hall.

The palace was constructed in 1832 from a design by court architect Georg Ludwig Friedrich Laves in the Neoclassical architectural style. The building is thought to be the first Neoclassically designed structure in the city. Laves also added a winter garden to the building in 1844. It was commissioned by Georg Christian von Wangenheim.

The palace was destroyed during World War II during an air raid. Though it was rebuilt later, the city once again demolished part of the palace to make room for the Leibnizufer and Friedrichswall streets.

As this is a government building that is currently in use, the building is rarely open for visitors. Those who wish to tour the interior of the building should call in advance to learn when and if public tours will be made available.
Image Courtesy of Wikimedia and Axel Hindemith.
3

The Leineschloss, or Leine Palace, is a former royal palace that currently serves as the seat of the Landtag of Lower Saxony. The palace was once the residence of the dukes and kings of Hanover. It also held the remains of nobility, including King George I who was originally buried in the chapel.

The palace has undergone a large number of renovations over the years. The first palace was constructed in 1636 in the Late Renaissance architectural style. It was enlarged in the 17th century when a theatre was added. It was then entirely rebuilt under the hand of architect George Ludwig Friedrich Laves in 1844.

The interior of Leineschloss was fully destroyed during World War II. It was rebuilt again in 1962 with a design from architect Dieter Oesterlen. Luckily, the portico envisioned by Laves was able to be saved.

Leine Palace is closed to tourists. However, visitors are welcome to explore the building's exterior, which is easy to reach from Leinstrasse. Likewise, the Hoffmann von Fallersleben Gedenktafel, across Leinstrasse from the palace, offers perfect views for admiring the Corinthian columns.
Image Courtesy of Wikimedia and Olaf Kosinsky.
4

Leibniz House was originally built as a residential home in 1499. It was given its current name after philosopher Gottfried Wilhelm Leibniz lived in the building from 1698 to 1716.

The building was destroyed in 1943 during a World War II airstrike. In 1966, the First International Leibniz Congress hosted by the Gottfried Wilhelm Leibniz Society began planning reconstruction. Unfortunately, the location had to be changed and a new building was erected next to the Historical Museum. The new and current Leibniz House was completed in 1983 using the original plans with a Renaissance architectural style.

The house is used as an event venue. It is also a popular backdrop for photographs for both locals and visitors. Of particular interest is the Oscar Winter fountain, which is often referred to as the wishing well. There is a long-held belief that wishes come true for those who turn the wrought-iron ring near the fountain's basin.
Image Courtesy of Wikimedia and AxelHH.
5

The Hannover History Museum, referred to as the Historisches Museum Hannover locally, is a historical museum that dates to 1903. It has collections that detail the history of the city and the state of Lower Saxony.

The museum was originally opened on April 26, 1903. Then referred to as the Vaterlandisches Museum and later the Niedersachsisches Volkstumsmuseum, it was destroyed during World War II during the 1943 Bombing of Hannover. Reconstruction began in 1950. The building looks like a palace in the front. From its back where the tower is, the building looks more like a medieval castle than a library.

The Hannover History Museum opened in 1966 in a new building designed by Dieter Oesterlen. Though the building itself was new, the last preserved medieval tower of Hannover was integrated into the museum. In addition, the museum incorporated a section of the city wall that was built in 1643.

The museum has four departments that cover the history of the region. These are From Principality to Kingdom, From Market Village to Trade Fair City, Life in the Country and Museum Herrenhausen Palace. The collections show the changes of the city using displays, photos, orders and even vehicles from the early 20th century.

The Hannover History Museum is open from 10 AM to 7 PM on Tuesday, 10 AM to 5 PM Wednesday through Friday and 10 AM to 6 PM on weekends. It is closed on Mondays.
Image Courtesy of Wikimedia and Axel Hindemith.
6

The Anzeiger-Hochhaus is a high-rise, 10-story building in the Mitte district of Hannover. Built in 1928, it was one of the first high-rise buildings built in the German Empire. The building is considered to be designed in the Brick Expressionism architectural style with elements of Gothic and Expressionist forms. Fritz Hoeger was the architect who designed this distinctive building.

It was built for publishing house Hannoverscher Anzeiger A. Madsack & Co. The building is where the German Magazines "Der Spiegel" and "Stern" were initially launched.

The Anzeiger-Hochhaus is one of the few buildings that was not destroyed during World War II. Because of its steel construction, it suffered from very little damage. Only the planetarium was burned, which was replaced with a movie theatre.

The building continues to be used by publishers and journalists. It is home to the HIS Hochschul-Informations-System and the TVN Group. RTL and Sat. 1 have regional editorial offices in the building. It is also home to the country's highest cinema, which is held under the green dome.
Image Courtesy of Wikimedia and AxelHH.