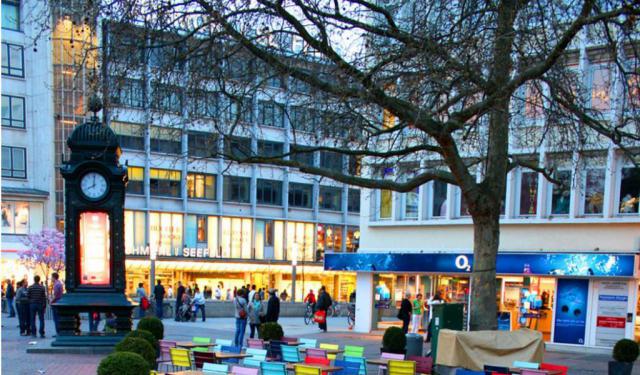 Image by Punxutawneyphil on Flickr under Creative Commons License.

Hannover is the perfect city to shop in, having all the top world brands concentrated within easily accessible areas. You're free to find what you're looking for in minutes or to spend days browsing the great stores. Take our Shopping Areas tour to find the best places to shop in Hannover, the capital of Lower Saxony.
How it works: Download the app "GPSmyCity: Walks in 1K+ Cities" from iTunes App Store or Google Play to your mobile phone or tablet. The app turns your mobile device into a personal tour guide and its built-in GPS navigation functions guide you from one tour stop to next. The app works offline, so no data plan is needed when traveling abroad.

Hannover's Markthalle is the best spot in the city to buy food, with a rich selection of everything from fruit and vegetables to cakes to sausages to wine. The area's also chock full of top quality restaurants as well as small cafes. Locals adore this market because they can get cheap high-quality products before having a nice lunch with a cup of cappuccino or a glass of wine.

Why You Should Visit:
Most people here are locals (so must be good), and prices are a lot cheaper than out in the local cafés.
You'll surely find something to your taste/budget and at the same time will probably discover something you never had before or find a nice buy.


Image by Punxutawneyphil on Flickr under Creative Commons License.
2

Prior to World War II, Hannover had an extensive Old Town characterized by shadowy lanes and half-timbered Gothic buildings. Unfortunately, bombing destroyed many of the buildings in the Old Town and today the remaining facades have been moved together to form a kind of “new” Old Town. The Old Town is now made up of around 40 half-timbered constructions and among them is Hannover’s oldest church, the Kreuzkirche, which dates from 1333. The Ballhofplatz was built as an indoor sports complex in 1949 and was later converted into an assembly hall and theater. Not to be missed, is the Leibnizhaus, which features stunning masonry work. It was originally built on the Osterstrasse in 1499 and the well-known philosopher Leibniz lived there in the 1670s.

In the Old Town, the Leineschloss, is today used as a parliament building, but actually dates from the 12th century, when it was a Franciscan monastery. It was dissolved as a monastery in 1553 and the Duke of Calenberg used it as a residence from 1636. Visiting Hannover’s Old Town is a captivating experience, with its rich historical atmosphere and wonderful dining and shopping options making it a perennial tourist favorite.
Image by treehouse1977 on Flickr under Creative Commons License.
3

The Georgstrasse is the main boulevard of the city's pedestrian zone. Here the crowd is always on the move, checking the latest fashion at fancy boutiques and trendy department stores. The boulevard is a crucial part of any shopping trip in Hannover, and is thought of as one of the most important shopping streets in all of Germany. Customers living far from the city come here to enjoy the great shopping opportunities on offer all along the street.
Image by Dguendel on Wikimedia under Creative Commons License.
4

The Kropcke Platzt is at the center of all of Hannover's great shopping streets. From here you can head in any direction to start your shopping experience. With a huge blend of stores including many international brands, Kropcke Platzt is the shopping hub of the city. It is named after Wilhelm Kröpcke, one of the owners of the former Café Robby, which was erected on the then-nameless place in 1869. Kröpcke leased the café in 1876, changed the business's name to Café Kröpcke and operated the café until 1919. Eventually, the place adopted the name from the café and in 1948 was officially named Kröpcke by the city of Hanover. One of its notable features is the Kröpcke clock, which is a 1977 replica of an 1885 clock that was scrapped after World War II.
Image by Heidas on Wikimedia under Creative Commons License.
Sight description based on wikipedia
5

The Bahnhofstrasse is also part of the city's pedestrian zone. This easily accessed street is home to numerous great department stores, making for a pleasant stroll and a fantastic place to shop.
Image by f650biker on Flickr under Creative Commons License.