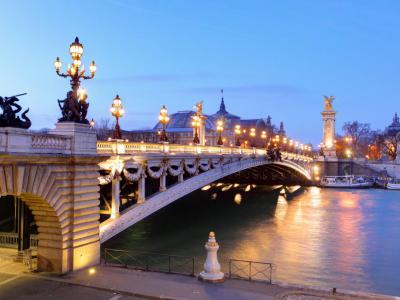 While Paris abounds in beautiful bridges, the bridge of Alexandre III beats them all hands down. This deck arch bridge, spanning the river Seine between the Champs-Élysées and Les Invalides quarter, is widely regarded to be the most ornate and extravagant bridge in the French capital, a truly historic attraction in its own right!

It was built at the end of the 19th century, in time for the 1900 World Exhibition in Paris, under the supervision of Russian Tsar Alexander III upon the conclusion of the Franco-Russian Alliance. The bridge proved to be a genuine feat of engineering of the time, not only because of its single arch but also because it needed to sit low, so as not to obstruct the view from the Les Invalides over to the Champs-Élysées Avenue. The design and construction of the bridge was done by numerous artists who added just as many intricate elements to its ornamentation, including the lovely bas-relief ironwork, gilded and ornate street lamps, as well as four golden statues representing the Art, the Commerce, the Industry and the Science. The lower part of the bridge – the piers and the groynes supporting it – are just as impressive, especially for those who sail underneath it.

Why You Should Visit:
Just about every bridge in Paris is beautiful but this one probably tops them all – a museum by itself!

Tip:
If you happen to be at the bridge at night, make sure to walk down the stairs and check out its underbelly for some truly amazing photos.
Also, look out for a small antiques market down there, along the riverfront, for some vintage fashion, excellent silver flatware, and knick-knacks of various sort.
Image by Derrick Brutel on Flickr under Creative Commons License.