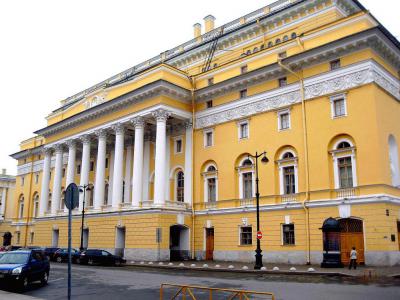 The Alexandrinsky Theater, also known as the Russian State Pushkin Academy Drama Theater, was established as a museum in 1756. Next to the Fodor Volkoy Theater, it is one of the oldest national theaters in Russia. Carlo Rossi designed the Empire-style building that houses the museum today.

Located on the well-known Nevsky Prospekt, the world-famous theater hosts performances by the Russian Ballet and other troupes. Dramatic plays by famous playwrights also occur on a regular basis. Visitors lucky enough to visit during the month of September should not miss the Alexandrinsky Festival. The festival strives to bridge the gap between the Russian theater and the theaters of other countries. In addition, the theater has an impressive catalog of costumes, set decorations, and furniture for those lucky enough to visit.

The beauty of the theater can only be appreciated in person. The immense stage is graced by a beautiful arched five-tier balcony, while the lobbies display a luxury one would expect in a palace. The walls of the theater display images of Russian artists, politicians, and servicemen. Leading artists of the day, Pushkin, Tolstoy, and Tchaikovsky visited the theater. Valery Fokin, a highly acclaimed director, is the current artistic director of the theater.
Image by Yair Haklai on Wikimedia under Creative Commons License.
Sight description based on wikipedia