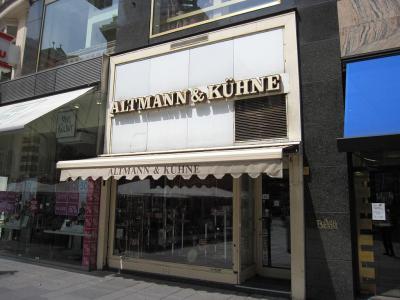 Altmann & Kühne is a confiserie and chocolaterie in Vienna, Austria, established in 1928. It produces handmade chocolates and bonbons with a special packaging designed by Wiener Werkstätte.

The business, which advertised itself as a supplier to the former Imperial Court, successfully grew during the interwar period. By 1938, Altmann and Kühne was Vienna's fourth chocolatier - a "smaller but upscale producer" trailing after the "big three" of Victor Schmidt, Heller and Küfferle. After the Nazi takeover Emile Altmann and Ernst Kühne, who were Jewish, fled to New York City. But the business survived through the Nazi years and World War II owing to the persistence of one loyal employee, Mrs. Mercek.

Today visitors with a sweet-tooth will be glad to find this shop of tasty souvenirs. Inside the store, the chocolates packages featured modernist designs by the artists of Wiener Werkstätte school.
Image by Gryffindor on Wikimedia under Creative Commons License.