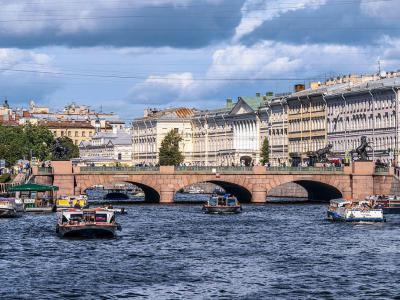 The Anichkov Bridge is a prominent overpass that graces the Fontanka River on Nevsky Prospekt. Well-known Russian authors, such as Pushkin, Gogol and Dostoevsky, referred to this bridge in their writings.

The original bridge was constructed from 1715 to 1716 by order of Peter the Great, and was named after its engineer, Mikhail Anichkov. Designed by Domenico Trezzini, the structure was made of wood. In 1841, it was replaced with a stone bridge to meet the demands of increased traffic.

A stunningly simplistic design, the pink granite bridge features three arched spans and cast iron railings adorned with mermaid and seahorse decorations. Its most stunning elements, however, are The Horse Tamers, four bronze sculptures designed by Baron Peter Klodt von Urgensburg. Prior to their installation in 1851, the statues were replicated several times, with some of the copies sent to Prussian King Frederick William IV, as a present, by Nicholas I. An urban legend has it that Klodt depicted his powerful enemy's face under the tail of one of the bronze stallions...

During World War II, the bridge came under heavy artillery fire, so the sculptures were removed and buried in the nearby Anichkov Palace garden. The bridge itself sustained serious damage but was fully restored after the war. As a memorial, the pedestal of one of the statues retains the scars of German shelling, accompanied by a commemorative plaque. Prior to the tercentenary of Saint Petersburg, the statues were removed from the bridge again and underwent thorough restoration.

Why You Should Visit:
Nice sculptures and full atmosphere of Nevsky Prospekt. The palaces facing the bridge are splendid. Also, you can schedule a boat trip from this bridge (no need to go to the Neva river).
Image Courtesy of Wikimedia and Florstein.
Sight description based on Wikipedia.