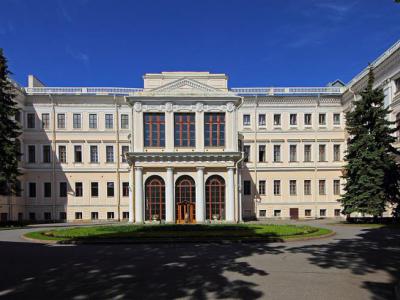 Anichkov Palace is the former residence of Empress Elizabeth of Russia. Named after the nearby Anichkov Bridge, it occupies an entire city block. The Baroque style palace was built from 1741 to 1754. Its original designer was Mikhail Zemtsov, while the remaining construction was completed by Bartolomeo Francesco Rastrelli. The palace was renovated in 1778 by Ivan Starov.

Over the years, the property was gifted several times from one person to another. Empress Elisabeth first gave it to Count Aleksey Razumovsky, after whose death Catherine the Great gave it to Prince Potemkin, upon which Alexander I presented the palace to his sister, Grand Duchess Elena Pavlovna of Russia. Following his marriage in 1866, the future Tsar Alexander III and his wife, Maria Feodorovna, made the Anichkov Palace their St. Petersburg residence.

After the October Revolution of 1917, the palace was nationalized and used briefly as a city museum. In the mid 1930s it became Leningrad's Pioneers' Palace housing over 100 after-school clubs for more than 10,000 children. Now named the Palace of Youth Creativity, it is home to a variety of organizations offering after-school education in arts and crafts, sport, sciences, and engineering. Part of the building is also used for the Anichkov Lyceum, one of St. Petersburg's most prestigious secondary schools.

The palace has two pavilions and a small museum. While the museum is open to the public at selected times, the edifice is normally not accessible to tourists. Visitors to the museum must call in advance, providing date and time of visit, the number of people, and contact information.
Image Courtesy of Wikimedia and A.Savin.
Sight description based on Wikipedia.