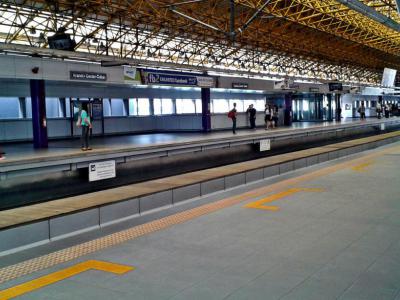 The station is the eighth station for trains headed to Santolan, and the fourth station for trains headed to Recto. The most recognizable landmark that the station is located near is Araneta Center, home to popular shopping malls such as Ali Mall and Gateway Mall. Araneta Center-Cubao LRT Station, usually called Cubao LRT Station, is a station on the Manila LRT Purple Line (MRT-2). The station is located in Cubao in Quezon City, and is named because of its location in the district of the same name and its location near the famed Araneta Center, which is one of the Philippines' most recognized shopping centers.
Image by Icqgirl on Wikimedia under Creative Commons License.
Sight description based on wikipedia