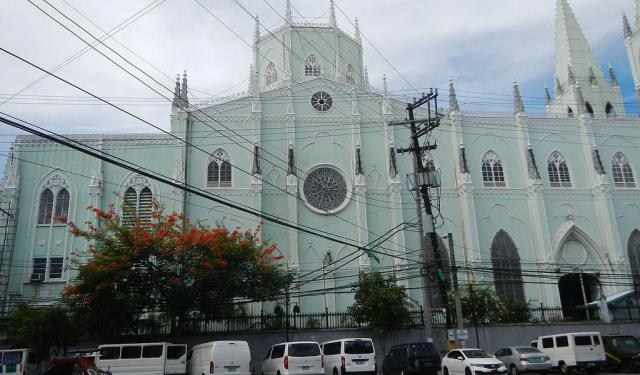 International surveys have repeatedly ranked Filipinos among the world’s most religious people. The archipelago’s colonization and evangelization by the Spanish, started in 1565, has left Manila with many shrines and churches sprawled around its streets, despite the destructions by wars and natural disasters. Some of these old churches are especially attractive due to their delicate mixture of styles, exclusive interiors, and – above all – historical value.

Start your journey with San Agustin – the oldest church in the Philippines, and the only building left intact after the destruction of Intramuros (the historical walled city) in the Second World War. Its ornate interior is suitably filled with objects of great historical & cultural significance.

Other highlights include the impressive 19th-century San Sebastian Basilica built from coral stone and especially striking at night when its bell towers are illuminated.

Take this self guided walking tour to admire some of Manila’s most treasured places of worship!
Image Courtesy of Wikimedia and Judgefloro.
How it works: Download the app "GPSmyCity: Walks in 1K+ Cities" from iTunes App Store or Google Play to your mobile phone or tablet. The app turns your mobile device into a personal tour guide and its built-in GPS navigation functions guide you from one tour stop to next. The app works offline, so no data plan is needed when traveling abroad.

Behind the wall of the Intramuros, the oldest walled city within Manila is one of the oldest surviving churches of the country. The San Agustin Church, built by the Spanish during their colonial reign, represents the city’s rich and vibrant past.

The San Agustin Church has come a long way since its inception in 1607. Initially built with bamboo and wood in the early 16th century, the structure was razed due to a fire and was reconstructed with wood, which also failed to survive. It was then that the Augustinians decided to build a solid structure made out of stone, with an adjacent monastery. Based on the design by architect, Juan Macías, construction started off in 1586. Although, the project started with zeal and enthusiasm, the same spirit was not seen with the inflow of funds. Construction took more than 2 decades and by the time it was completed, the Church lost its chief designer Macias.

Image Courtesy of Wikimedia and patrickroque01.
2

Despite its reputation and opulence, the Cathedral has had a very turbulent past. Although the Church has been on site since the early 16th century, the structure has changed several times over the years. The present, being the eighth reincarnated version of the original structure! The Cathedral was destroyed by earthquakes and terrible fires, but despite that, it has always managed to maintain that special possession not only in the city’s skyline, but also the hearts of the denizens.

With the Cathedral and the city having the same patroness, the Virgin Mary, the Metropolitan Cathedral Basilica is also the highest seat for the Archbishop of the country.

Inspite of several ups and downs, the Minor Basilica of San Lorenzo Ruiz, better known as the Binondo Church stands tall on the Ongpin street. The Church is named after Lorenzo Ruiz who served as a sacristan at the church and later became a missionary in Japan. He is well known as the world’s first Filipino saint. The architecture of the church shows evident features of both Philippine and Chinese styles. One of the Chinese features seen in the church is the octagonal shaped bell.

Originally built in 1596, the Church was in ruins in 1603 during Chinese revolt. In 1614, it was built again and renamed as Our Lady of the Most Holy Rosary. In 1762, the Church became a victim of the British bombardment and had to be reconstructed. It was destroyed yet again in 1863 due to the earthquake and was rebuilt. During the Second World War II, the Church was destroyed again and lay in ruins until it was finally rebuilt in 1984.

Even after all this turmoil, the Church retains its external look whereas the interiors show modern architectural features. The paintings that have been put up at the altar and the light colored marble columns enhance the spacious interiors of the Church. The Mass is usually conducted in either Foolien or in Mandarin. This beautiful basilica famous for its religious importance and its history, is a common tourist location.
Image Courtesy of Wikimedia and Judgefloro.
4

Built in the northern part of Manila, between the Tondo and Quiapo districts is the Spanish baroque styled Santa Cruz Church. This Roman Catholic Church located near the bank of Pasig River was built by the Jesuits in 1608 for the increasing suburban Chinese population in the area who had converted to Catholic faith. The Jesuits oversaw the Church till they were expelled from the archipelago in 1768 after which the administration was overtaken by the Dominicans. After suffering damages due to the earthquakes and World War II, the present edifice was reconstructed in 1947.

The church is flanked by the Carriedo Fountain and the Church’s titular patroness Nuestra Senora del Pilar (Our Lady of the Pillar) which was canonically established in 1743. The Confraternity of Nuestra Senora del Pilar was brought from Spain, which is a reminiscent of the Spanish built mission in California. The College of San Ildefonso and the San Lazaro Hospital are also present in the vicinity of the Santa Cruz Church.

5) Minor Basilica of the Black Nazarene

Quiapo church, also known as St.John the Baptist Parish, is located in the District of Quiapo, Manila and is one the most famous churches in the Philippines. This Roman Catholic Church, houses the venerated statue of Jesus Christ, known as the Black Nazrene and hence the official name, Minor Basilica of the Black Nazrene. The Church currently belongs to the Archdiocese of Manila.

Not only the church but also the statue of the Black Nazarene were destroyed several times. The building was destroyed as a result of the fires of 1791 and 1929. In 1645 and 1863, the structure suffered damages due to earthquakes. It was also bombed by the Americans during World War II and was finally reconstructed to accommodate devotees in 1984.

The dark wooden statue of Christ carrying a cross is revered and believed to be miraculous by several Filipino Catholics. The statue was initially light colored but an accidental fire during its shipping from Mexico turned it dark. Although, the statue survived this fire, it was destroyed in 1945 during the Battle of Manila and was replaced by a replica given by the Recollect Priests. In association with its icon, the church has three annual processions on the 9th of January, New Years Day and the Good Friday. For public veneration, the Black Nazarene is brought out during these processions for the 8 million attendees.
Image Courtesy of Wikimedia and Jhun80.
6

Standing immaculately on the end of Claro M. Recto Street, in Quiapo, Manila, is the Basilica of San Sebastian. Known for its ornate architecture, the building is one of the many structures worth visiting in the city.

Built in 1891, the Basilica is known to be the first to accomplish many feats in the city. Apart from the immense history the building so profoundly displays, the Church is considered one of the first prefabricated buildings in the world. It is also the first structure in Asia to be built around a solid steel interior. The Basilica’s fame does not stop at just that. It is believed that Gustave Eiffel, the famous engineer behind the Eiffel tower and the strong steel interiors of the Statue of Liberty was very instrumental in building the Basilica of San Sebastian.

The motive behind the solid and unusual steel frame goes back to the series of earthquakes and misfortunes that razed the structure in the past. The first structure was built in the early 17th century but was brought down during the Chinese uprising. Further constructions on the site were brought down by a series of earthquakes in 1859, 1863, and 1880. It was then that the parish priest Estebán Martínez, approached Genaro Palacios, with a plan to make the indestructible church that would resist fire, mob and even earthquake.
Image Courtesy of Wikimedia and Lawrence Ruiz.