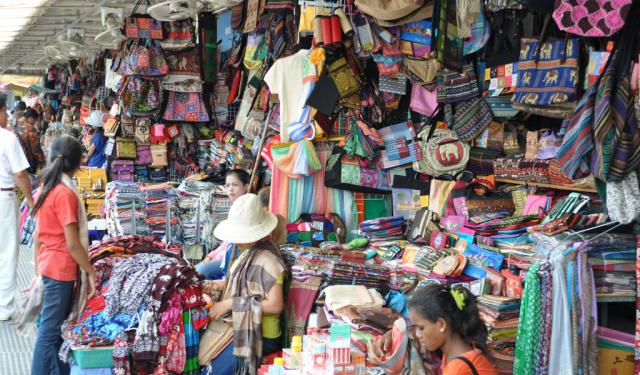 Traditional Manila markets sell more things that regular shops can provide: from vegetables and fruit to dried-fish stalls that go on forever. For real bargains, nothing beats Divisoria – or "Divi" as local shoppers call it. You're going to need at least a full morning – or full afternoon – to do it justice.

The action is particularly feverish at weekends. As in other crowded areas, be careful with valuables in your pockets, and try wearing your backpack on your front.

Shop around, haggle to save more money, and have fun with this self-guided shopping walk!
Image Courtesy of Flickr and shankar s..
How it works: Download the app "GPSmyCity: Walks in 1K+ Cities" from iTunes App Store or Google Play to your mobile phone or tablet. The app turns your mobile device into a personal tour guide and its built-in GPS navigation functions guide you from one tour stop to next. The app works offline, so no data plan is needed when traveling abroad.

The Divisoria Market is one of the best places to shop in Manila. It is often called the “mother of all markets in Manila” with a reputation as “the Mecca of value shopping” for the variety of products and the low prices it offers.

Unlike other markets, the Divisoria Market sells almost everything from jewelry to footwear, souvenirs to school items, electronics to foods all at wholesale prices. The market is also very popular for textiles. This colossal and chaotic market is located in the heart of the city, surrounded by Juan Luna, Santo Cristo, Recto and Comercio street.

During the Spanish rule, the non-Christian Chinese merchants were not allowed to trade inside the walled city. The Divisoria market was initially a small community of Chinese merchants which then expanded and blossomed into a commercial center and a major trade center in the 1990s.

Today, the market has several malls like the 168 mall, Meisic mall, Tutuban Center mall (former Tutuban Central Station) and the Divisoria Mall. Along with all the stores and malls, the Market also has a food hub where one can enjoy a variety of cuisines including the local Filipino food and Chinese food. Although, the market is busy year around, it is especially crowded before Christmas and around the time when schools reopen.

Quinta Market was built by the Spanish colonial government in 1851, the same year as the Divisoria Market. Quinta Market was the central market of the City of Manila, originally catering to the wealthy families that lived in Quiapo at the time. By the early 20th century, the market had become one of the city's most important markets. In 2017 the old market structure was torn down and replaced by a two-story modern facility.

Quinta Market is currently home to 279 registered vendors, all of whom were also registered vendors at the old market at the time when it was torn down. At Quinta Market you'll find vendors selling fish, meat, vegetables, fruits, and other foods. Some stands offer already-cooked meals, made from the products sold right there in the market. Locals adore this place, as many kinds of meat and very tasty fresh fish is brought to the market early in the morning.
Image Courtesy of Patrick Roque.
3

North of Quiapo Church, along Andalucia St., lies the dingy Central Market. Here, you can find clothes, military uniforms, knives and hardware, food, vegetables and fruits, shoes, toys, handmade jewelry, and souvenirs. In a word: everything. The diversity is astonishing and most things are at a reasonable price. The market is huge, and the products are segregated into different areas to make your shopping easier.
Image Courtesy of Flickr and Trishhhh.