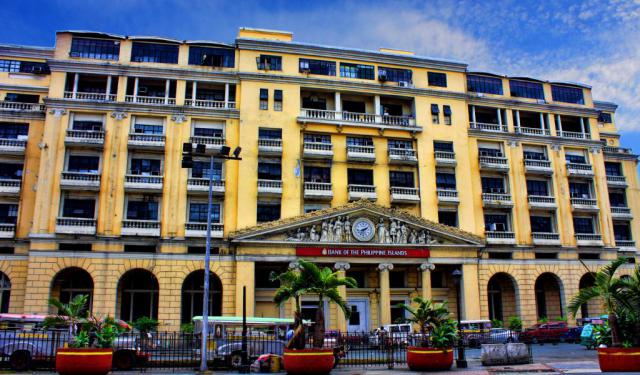 For a quick – but very engaging – tour of the city’s historic buildings, start at the Jones Bridge near Intramuros and look for the beautiful Central Post Office Building – an American-era landmark that lords over the Pasig River. Designed by famous Filipino architect Juan Arellano, it was built as a modern colonial architecture, an example of a perfect neo-classical monument. Arellano also designed the recently renovated Manila Metropolitan Theater, fittingly marking the tour’s end.

In between these landmarks, you will also get to see the iconic El Hogar Filipino building (designed in the Beaux-Arts/Neo-classical/Renaissance styles of architecture), and the nearby Calvo Building – another Beaux-Arts masterpiece which houses a treasure trove of pre-WWII photos and memorabilia on the 2nd floor.

Other highlights include the beautiful Bahay Nakpil-Bautista ancestral home, built in 1914. As well as an insight into the grandeur of pre-war Manila, the museum provides a history of the Ilustrados – the Filipino educated class during the Spanish colonial period in the late 19th century, and Katipunan – the anti–Spanish revolutionist movement.

If you’re interested in delving deeper in the city's past and colonial architecture, take this self-guided tour to see some of Manila’s outstanding historical landmarks!
Image Courtesy of Wikimedia and Ricardo C. Eusebio.
How it works: Download the app "GPSmyCity: Walks in 1K+ Cities" from iTunes App Store or Google Play to your mobile phone or tablet. The app turns your mobile device into a personal tour guide and its built-in GPS navigation functions guide you from one tour stop to next. The app works offline, so no data plan is needed when traveling abroad.

The Manila Central Post Office is the head office of the Philippine Postal Corporation. It is located on the bank of the Pasig River in the historic fortified part of the Philippine capital city. The structure was built in 1926 but suffered severe damages during the Second World War. Architect Juan M. Arellano designed it in neoclassical style. This Greco-Roman style building is a classic example of Western architecture that existed between the two world wars. Thankfully, the edifice was restored to its original splendor after the war and has inspired local students of architecture and those around the world with its immaculate design ever since.

Unfortunately, the interiors of the building do not meet the high expectations brought about by its magnificent exterior. Still, the building deserves a visit and must not be missed if you are in Manila. The Post Office is easily accessible from Liwasang Bonifacio Plaza, also known as Plaza Lawton.

Serving as the head office of the country’s postal operations, this facility handles the mail sorting and distribution operations. It also houses the philatelic section where enthusiasts can buy the latest as well as special edition stamps for their collections. Every year, Manila Central Post Office plays host for an exhibition displaying old stamps and equipment related to mail service.

Image Courtesy of Wikimedia and patrickroque001.
2

El Hogar Filipino Building, also known simply as El Hogar, is an early skyscraper in Manila. Built in 1914 El Hogar Building was designed by Ramon Irureta-Goyena and Francisco Perez-Muñoz in the Beaux-Arts style. Its architecture reflects elements of Neoclassical and Renaissance styles.

El Hogar Building was built as a wedding present of Antonio Melian y Pavia, third Count of Peracamps, to his bride Margarita Zóbel de Ayala, who was a sister of Enrique Zóbel de Ayala in 1914. During its heyday, El Hogar Building housed the Sociedad El Hogar Filipino, a financing cooperative founded by Melian, and the offices of Smith Bell and Company

It survived World War II and a number of earthquakes and is one of two remaining American-era structures in the area facing the Pasig River. Right across Juan Luna Street, on its northern front, is another important edifice, the Pacific Commercial Company Building or commonly known as the First National City Bank Building which was built in 1922.

The value of the building is its architecture, which is a representation of American period design, materials, and construction method. El Hogar Building is a representation of the architecture of business establishments of that era. It also has a collective value as one of the significant structures within the historic Binondo district and Escolta Street, along the cultural landscape of the Pasig River.

The Calvo Building is a historic building along no. 266 Escolta corner Soda Streets, Binondo, Manila. Built in 1938, it is an outstanding example of beaux-arts architecture. It served as the home of the radio station DZBB-AM before moving to its present location in Diliman, Quezon City. It now houses the Escolta Museum which contains memorabilia from the past. The building is designed by Ar. Fernando H. Ocampo, Sr..

The historical marker entitled Gusaling Calvo was installed on August 14, 2018 inside the building. It was installed by the National Historical Commission of the Philippines. The text on the marker says: "Built under the designs of Fernando Ocampo on the land owned by the couple Angel Calvo and Emiliana Mortera, 1938. Became offices of commercial companies, 1938 - 1944. Temporarily used by Japanese Imperial Forces, November 1944. Destroyed during the Battle of Manila, 1945. Restored, 1946 Calvo Building Museum was established on its second floor, 1994. One of the remaining buildings from the earlier part of the 20th century along Escolta Street."
Image Courtesy of Wikimedia and Ryomaandres.
Sight description based on Wikipedia.
4

The Don Roman Santos Building is a neoclassical building located along the historic Escolta Street in Santa Cruz, Manila. It fronts Plaza Lacson (formerly Plaza Goiti) which leads to directly to Carriedo Street or to Rizal Avenue. It was built in 1894 and expanded in 1957.

The site has been the original offices for Monte de Piedad Savings Bank from 1894 to 1937. It then became an American Red Cross-operated hospital from 1945 to 1947 after which housed Prudential Bank and South Supermart. Currently, the ground floor serves a branch for the Bank of the Philippine Islands after it acquired Prudential Bank in 2005.
Image Courtesy of Wikimedia and Ramon FVelasquez /public domain.
Sight description based on Wikipedia.
5

The Nakpil-Bautista House is one of the old houses found in the district of Quiapo, Manila. It was built in 1914 by Arcadio Arellano. The two-house originally sits on two lots, having a total area of 500 square meters. The National Historical Commission of the Philippines declared the house as a cultural property on August 25, 2011. Today, the house is a museum showcasing items of the Katipunan, paintings, among others.

Arcadio Arellano built the house for Dr. Ariston Bautista and his wife, Perona Nakpil. Built in 1914, the house is typical of its period: in the lower storey, thin, narrow, brick walls pressed together by wooden studs; upstairs, rooms aired by large calados and shaded by sufficient media aguas. The house is a Bahay na bato and had two entrances, a street door and a large iron gate, typical of many Manila houses of the period. The large iron gate leads to the estero behind. The lower story is in the wood-and-stone style post-1880.

Key figures in Philippine history had lived in the Nakpil-Bautista House. Among them are Dr. Ariston Bautista, one of the first professors in the University of the Philippines College of Medicine, also invented a medicine to combat cholera. Gregoria de Jesus, widow of Andres Bonifacio; later married to Julio Nakpil, who was the brother of Petrona, Juan Nakpil, a National Artist for Architecture, and Angel Nakpil. The Nakpil-Bautista House also housed the original Black Nazarene statue of Quiapo Church during the World War II bombings.

It has been declared a National Historical Landmark.
Image Courtesy of Wikimedia and Dasig.studio.
Sight description based on Wikipedia.
6

The Manila Metropolitan Theater is a Philippine Art Deco building found near the Mehan Garden . It was designed by architect Juan M. Arellano.

In 1862, the Teatro del Príncipe Alfonso XII was built within Plaza Arroceros, near the present-day Metropolitan Theater. This theater stood until 1876, when the old theater was burnt down.

It was in 1924, during the American Colonial period that the idea of constructing a theater in Manila came about. The construction began in 1930 and was inaugurated on December 10, 1931. This new theater housed different performances from zarzuelas, dramas to translations of foreign classics.

The Metropolitan Theater façade resembles a stage being framed by a proscenium-like central window of stained glass which carries the name “Metropolitan” with flora and fauna motif surrounding the label. This helps bring in light to the lobby. It was highlighted on both ends by the curving walls with colorful decorated tiles in resemblance with the batik patterns from Southeast Asia. There are also moldings of zigzag and wavy lines that go with the sponged and painted multi-colored massive walls. The wall that framed the stained glass is a segmented arch with rows of small finials on the upper edge of the wall.

Angkor Wat-inspired minarets crown the top of the concave roof which suggested its status as a theater back in its prime days. Located in the entrance are elaborate wrought iron gates which are patterned into leaf designs and various lines. Accenting the ground level are Capiz lamps and banana-leaf formed pillars which go alternately with the theater's entrances.

The theater's roof and walls were partially destroyed during World War II. During the post-war period, it was misused as a boxing arena, low-quality motel, gay bar, basketball court and as a home for squatters. In 1978, a restoration of the theater was initiated by the then Governor of Metro Manila Imelda Marcos which was headed by Otilio, the nephew of Juan Arellano.

In May 2015, the Department of Budget and Management released Php 270 Million from the National Endowment Fund for Culture to start the rehabilitation process of the Met. The restoration project is planning to open the two wings of the theater by 2020 and open the new Metropolitan Theater Complex by 2021.
Image Courtesy of Wikimedia and Patrick Roque / public domain.
Sight description based on Wikipedia.