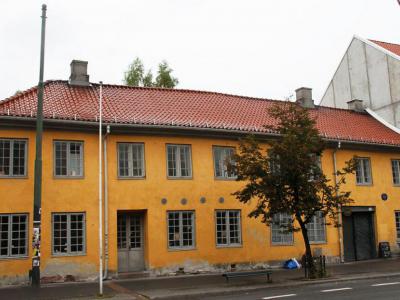 The Asylet is located on Grønland Street, the central thoroughfare in the Oslo district of the same name. Grønland is a bohemian, multicultural district where you can avoid some of the notoriously steep prices found elsewhere in the city. There are a number of modern homes and offices springing up in the area, and a great range of trendy bars, restaurants and exotic food stores.

The Asylet itself is one of the oldest surviving buildings in the area, and indeed the entire city. A two storey complex built from notched timber around a central yard, it has stood here since 1730. It’s unofficial name translates as ‘asylum’, as that was the building’s purpose for many years. Originally built as a merchant’s yard, it has also served as a courthouse, bank division and hospital.

Today, in addition to providing housing along its upper floors, it contains a diverse collection of cafes and restaurants, with al fresco dining available. The complex also houses offices and workshops. A popular spot for Oslo’s citizens to meet, work and relax, it has also been given a less dramatic nickname – Kommunegården, or ‘communal yard’. The building is preserved as a historic monument by the Norwegian government.
Image by Bjoertvedt on Wikimedia under Creative Commons License.