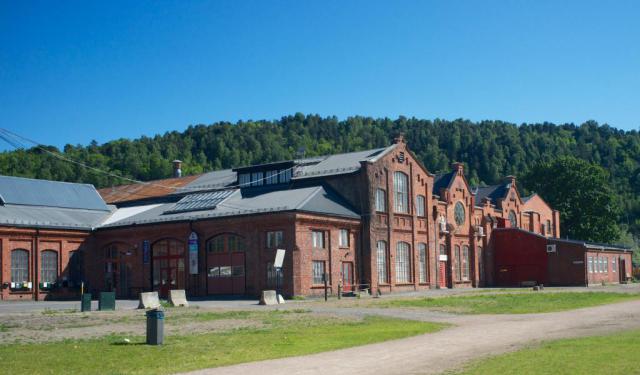 The Old Town of Oslo is the oldest urban area within the current capital. This part of the capital of Norway was simply called Oslo until 1925 while the city as a whole was called Kristiania. Oslo's old town was established with the urban structure around the year 1000 and was the capital of Norway's dominion in 1314. The main Old Town area has several ruins of stone and brick lying above ground, and large amounts of protected culture underground. Follow this self-guided walking tour to explore the main sights in Oslo Old Town.
Image Courtesy of Wikimedia and Kjetil Ree.
How it works: Download the app "GPSmyCity: Walks in 1K+ Cities" from iTunes App Store or Google Play to your mobile phone or tablet. The app turns your mobile device into a personal tour guide and its built-in GPS navigation functions guide you from one tour stop to next. The app works offline, so no data plan is needed when traveling abroad.

Oslo Manor House is located in Oslo’s medieval quarter. Rapid urban development in the 20th century caused the area to become neglected, with main roads cutting through it, and buildings falling into disrepair. After a major period of restoration, today the area is a popular tourist destination, with newly renovated buildings like the Manor House offering a glimpse into life in the bygone ages of Norway.

Oslo Ladegard, as it is known locally, dates from 1720. It is found in the heart of the medieval center of Oslo, at the foot of Ekeberg Hill. A baroque manor house, it was built over the cellar of the nearby Bispeborgen building. The newly restored interior features paintings, furniture and decoration from different artistic eras. In the house’s former attic, you can find scale models of Oslo in medieval times, and an exhibition on burial rites in the Middle Ages.

The manor house is open to guided group tours throughout the year, although these need to be pre-booked. Tours without reservation run during the summer season, but are carried out in Norwegian only. The grounds host an al fresco café in the summer months, as well as open air concerts on Wednesdays throughout the year.

Image Courtesy of Wikimedia and Mahlum.
2

Minneparken is a spot in Oslo that should not be missed by anyone who is interested in archaeology and medieval ruins. Minneparken is the site of ruins from three 12th century buildings: St. Hallvard's Cathedral, Holy Cross Church and St. Olav's Monastery.

St. Hallvard's Cathedral is notable as the first cathedral in the city. It was built in the early 12th century and later used as the coronation church and royal wedding church. Excavation commenced on the ruins in 1865. However, excavation wasn't completed until early 1920s when Gerhard Fischer took over.

St. Olav's Monastery was a Dominican order monastery that was established in the 12th century. Excavation began on the monastery in 1914 and was completed in 1926 by Fischer. It is said to be the best-preserved monastery in Norway. Visitors are welcome to enter St. Olav's as part of a guided tour.

The least is known about Holy Cross Church. It is believed to be constructed prior to 1240.

St. Hallvard's Cathedral (Hallvardskatedralen) was the former Oslo Cathedral. It fell into disrepair in the 17th century and is today in ruins. The site is located in the Old Town Oslo.

The cathedral was built during the early 12th century. Oslo was abandoned after a devastating fire in 1624 and the foundation of a new city, Christiania, about one kilometer further west. St. Hallvard's Cathedral was used as a church until about 1655. Besides being the bishop's seat and religious center of eastern Norway for about 500 years, the cathedral was the coronation church, royal wedding church, royal chapel, and one of Scandinavia's most visited places of pilgrimage.

St. Hallvard cemetery is located south of the cathedral. It was the honorary cemetery in Oslo and eastern Norway from around 1130 to 1639. Bishops and other prominent men and women were interred in the church along with Norwegian kings.

First excavations of the ruins were conducted in 1865 by Norwegian archaeologist Nicolay Nicolaysen. Parts of the ruins were removed during the construction of the Ostfold Rail Line in early 1920s. The cathedral was the main attraction when Memorial Park in Old Town (Minneparken i Gamlebyen) opened in 1932. Next to the cathedral ruins lies the ruins of the medieval parish church, Holy Cross Church (Korskirken).
Image Courtesy of Wikimedia and Vidariv.
Sight description based on Wikipedia.
4

Gamlebyan Church, also known as Old Town Church, is a private church that is part of Oslo University Hospital. The church was built on the foundation of a Franciscan monastery that dates to 1290. However, the building itself was completed much later in 1796 using the Louis XVI architectural style.

The church has not been in use since 2014. This is partially due to the fact that it is aged, but also that it only has seating for 200 people. It may be difficult to gain entry into the church to see the inside. However, it is worth walking by the Old Town Church to see the church and the medieval ruins on which it was built. Those who can take a look inside will see the suspended pulpit, which was added in the 19th century.

Gamlebyan Church is located in Gamle Oslo, or Old Oslo. Visitors can explore many of the Old Town landmarks and relics while touring the area on foot. Some of these include Minneparken, Middlealderparken, Kongsgarden and the Ruins of Cleminskirken.
Image Courtesy of Wikimedia and PaulVIF.
5

The cemetery is still in use with the oldest graves dating to the early 1800s. The cemetery includes a field of sailor's graves, graves for railway employees and a Muslim burial field in which all graves face Mecca. The cemetery includes a field and monument for those who have been cremated. The oldest grave at Gamlebyan belongs to Barbara Margarethe Brockmann Schnitlek who passed away on May 1, 1829. The majority of the graves began appearing in the late 19th century and continue being placed through present day.

Visitors are welcome to walk respectfully through the graveyard if they wish. It has a large walking path that is shaded by mature trees, which provide a nice break from the traffic on nearby Dyvekes vei.
Image Courtesy of Wikimedia and Mahlum.
6

Middelalderparken is a park worthy of any Oslo walking tour. The park is known as the Medieval Park, which may seem ironic in that it wasn't opened until the year 2000. It gains its name not from the history of the park itself but for the landmarks that are located within.

Like many of the medieval ruins of Oslo, St. Clement's Church was excavated by Gerard Fischer. The stone church is thought to have been built around the year 1100. However, more than 80 burials were discovered beneath the church that have been carbon dated to the year 980. These burials are believed to be some of the oldest Christian burials in Norway.

St. Mary's Church was a stone church, possibly built in the 1200s, which was preceded by wooden, stave church constructed around the year 1050. During excavation, the remains of King Haakon V and Queen Consort Euphemia of Rugen were found. Those remains were removed to Akershus Fortress.

Oslo Kongsgard was the 11th century royal residential palace. It served in this capacity until Akershus Fortress was built.
Image Courtesy of Wikimedia and Helge Høifødt.
7

The church was consecrated to St. Clement, who was one of the 1st-century popes. He was martyred by being drowned with an anchor tied around his neck and thus became the patron saint of, among other things, seafarers.

It was a stone church with a tower, and was one of the very few churches with the double-nave floor plan. There were entrances to the south and west. Along the middle axis of the choir there were three pillars which stood in a row along the middle of the church and supported the roof. The church went out of use after the Protestant Reformation and was probably demolished in 1540.

The ruins were first exposed and examined through excavation by architect Gerhard Fischer in 1921, then remained for years unnoticed. In 1970–71, archaeologist Ole Egil Eide had the opportunity to dig further into the ground under the church, and found traces of burials, 81 in all, all of which older than the stone church. Seven layers of burials were found under the stone church.

Beneath the sand layer, Eide found additional 60 graves. His interpretation is that there have been at least two churches, presumably stave churches, on the spot where the stone church was built around 1100. The oldest of the graves were radiological dated to about 980-1030, and were some of the oldest Christian burials found in Norway.
Image Courtesy of Wikimedia and Helge Høifødt.
Sight description based on Wikipedia.
8

St. Mary's Church had been built of stone in stages with final additions made in the 14th century. A major remodeling in the 1200s gave the church a new Gothic choir. Major rebuild in the 1300s added two large towers to the west and a new and large cruciform choir. It was the royal chapel and had an important political role, as its provost from 1314 also was Chancellor of Norway. The church was set on fire in connection with the Swedish war of independence from the Kalmar union in 1523. In the aftermath of the Protestant Reformation, it was so dilapidated that it could not be repaired and was demolished in 1542.

Excavations were first conducted in 1867 and later in the 1960s. Traces of an older wooden structure were discovered which were dated to around the year 1050. Remains of two people, deemed to be King Haakon V and his Queen consort Euphemia of Rügen, were discovered during excavations and re-interred in the Royal Mausoleum in Akershus Castle.
Image Courtesy of Wikimedia and Grzegorz Wysocki.
Sight description based on Wikipedia.