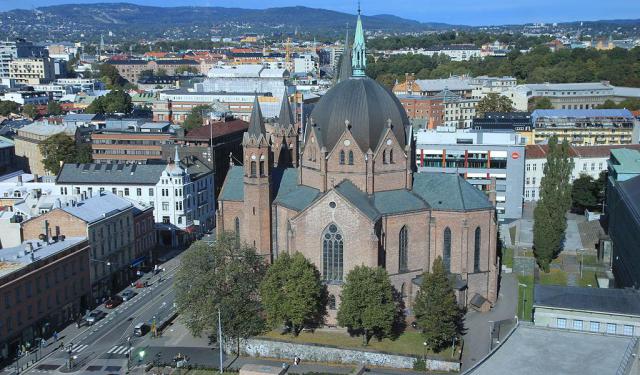 Learn more about the religious life of Oslo by taking this self-guided walking tour of the city’s most important sacred sights. An interesting variety of design, including Protestant and Catholic churches, can be found on this walk.
Image Courtesy of Wikimedia and Vidariv.
How it works: Download the app "GPSmyCity: Walks in 1K+ Cities" from iTunes App Store or Google Play to your mobile phone or tablet. The app turns your mobile device into a personal tour guide and its built-in GPS navigation functions guide you from one tour stop to next. The app works offline, so no data plan is needed when traveling abroad.

Oslo Cathedral, previously known as Our Saviour’s Church, is the current cathedral for the city, and the third in the history of Oslo. The first was built in the 12th century when the city was located slightly to the east of where it now stands. Following a great fire in 1624, the city was rebuilt around Akershus Slott. The second cathedral lasted only fifty years before another fire destroyed it. The current building, located off the Stortorvet main square, was consecrated in 1697. Rebuilt in 1850 by Chateauneuf and von Hanno, this elegant, if unassuming, neo-Gothic church was most recently restored between 2006 and 2010, and reopened with a grand Mass.

The cathedral is used by the Norwegian royal family and government for public events. It was the venue for Norway’s last royal wedding in 2001, when Haakon, Crown Prince of Norway, married Mette Tjessem Hoiby. The interior is notable for fine stained glass windows designed by Emanuel Vigeland, a silver sculpture by Arrigo Minerbi, and elaborate ceiling decoration by Norwegian painter Hugo Mohr. Home to the Bishop of Oslo, the church holds Mass each Sunday and is free to visit throughout the week. Guided group tours can also be arranged on weekdays.

Why You Should Visit:
Simple and elegant, and open for everyone. The pulpit and King's seating area are beautifully carved, and the ceiling and Last Supper bronze are very worth seeing.
Not merely a religious building but a center of culture for the whole city; in fact, you can often attend many different concerts and events during the year.


Image Courtesy of Wikimedia and rheins.
2

The Trinity Church (in Norwegian, Trefoldighetskirken) or Church of Holy Trinity, is a church in the neighborhood of Hammersborg in central Oslo. It is the parish church of the parish of Trinity, belonging to the Diocese of Oslo of the Church of Norway and was consecrated in 1858. It is one of the largest churches in Oslo (1000 seats).

At least three architects took part in designing and building it. The church itself is in the raw red brick, while the vaults, arches and small columns have gray scale color. The nave is octagonal with a Greek cross superimposed, with the choir in the apse, shallow transept and rectangular entrance flanked by two slender, octagonal bell towers. A central dome rises above the church. The Trinity Church is one of the largest of the many octagonal churches in Norway, but one of few constructed in red brick.
Image Courtesy of Wikimedia and Bjørn Erik Pedersen.
Sight description based on Wikipedia.
3

The cathedral was designed by architect H.E. Schirmer in the neo-Gothic style. Inaugurated in 1856, it became the main church of the Catholic Diocese of Oslo a century later. Highlights of the church’s interior include an altarpiece depicting Raphael’s Madonna, an Italian marble tabernacle donated by Pope Pius, and a throne used by Pope John Paul II in 1989. Fully restored in 1975, the church was fitted with a new high altar and pillars in the naves. The oldest item found in the building is the last surviving relic attributed to King Olav, the patron saint of Norway, after whom the cathedral is named.
Image Courtesy of Wikimedia and Cnyborg.
Sight description based on Wikipedia.
4

The quirky nature of the church’s design, and the sudden, surprising collapse of its congregation, led locals to attach a mythical status to the building. Nicknamed the ‘day of judgment’ church, it was prophesised that the re-inauguration of Maria Bebudelses Kirke would herald the end of the world. Thankfully, this fanciful myth was proved untrue when a Greek Orthodox congregation moved into the church in 1986. They still hold regular services in the building, and have grown to number at least 500 worshippers. The church is also used by migrant Orthodox worshippers from other nations in south-eastern Europe, including Bulgaria and Serbia.
Image Courtesy of Wikimedia and Chris Nyborg.
5

Jakob Cultural Church, known locally as Kulturkirken Jakob, is a neo-Gothic church, typical of many in Scandinavia. Built in 1875, it is known for its surprisingly large capacity (up to five hundred worshipers) and excellent acoustics. As a result, the church has forged a reputation as a venue for cultural events – hence the name ‘kulturkirken’. The building hosts concerts, art exhibitions and plays. Many events carry a religious context, but the church is keen to promote local and global art and culture, regardless of its religious views.

Galleries are held in a 250 square meter exhibition room, with a bar attached. The church’s main hall, 18 meters in height, has proved a popular concert venue. While the church may look like many others around Oslo, what goes on inside the redeveloped building make it a unique attraction. Found at the corner of Grunerlokka and Gamlebyen, the church has grown to become one of the city’s best artistic venues. Current events include Norwegian language plays, and a workshop on African art and culture. The church is not open for public tours, but can be booked for private events. The building is open to paying visitors whilst performances and exhibitions are taking place.
Image Courtesy of Wikimedia and David Castor.
6

St. Edmund’s Church is an Anglican place of worship, with a predominantly English speaking congregation. The church has had a presence in the city since the mid 19th century. The current building located on Møllersgata was dedicated in 1883, and consecrated by the Bishop of Fulham. Whilst the church belongs in theory to the Church of England, it hosts worshipers from Anglophone nations around the world. Each Sunday, St. Edmund’s congregation is made up of nationals from over twenty countries, making it one of Oslo’s most diverse churches. The Sunday service takes place at 11am, with an informal coffee morning taking place afterwards.

A compact neo-Gothic design, the church is often referred to as a miniature cathedral. Designed by architect Paul Due, it is known for its stained glass windows and ornate central spire, which stand out in a fairly drab corner of the city. The church is a welcoming city center place of worship, and hosts a Junior Church, student group and women only events. There is also a choir who host regular recitals. St. Edmund’s Church is the popular choice for Christians visiting Oslo from other countries, or migrants looking for a new place of worship in Norway.
Image Courtesy of Wikimedia and Øyvind Holmstad.
7

Currently housing a predominantly Swedish congregation, this elegant church still holds regular services, on Sundays and weekday evenings. The church is perhaps best known in Oslo for its efforts during World War 2. With Norway under attack from Nazi Germany, the church provided food to a large portion of the city’s population. It is believed that over 7000 people came to St. Margaret’s each day for food – most famously, the low cost ‘Swedish soup’ which the church regularly served to the hungry citizens of Oslo. The church building is also known for its excellent acoustics, and choral recitals are often held here as a result.
Image Courtesy of Wikimedia and Ssu.