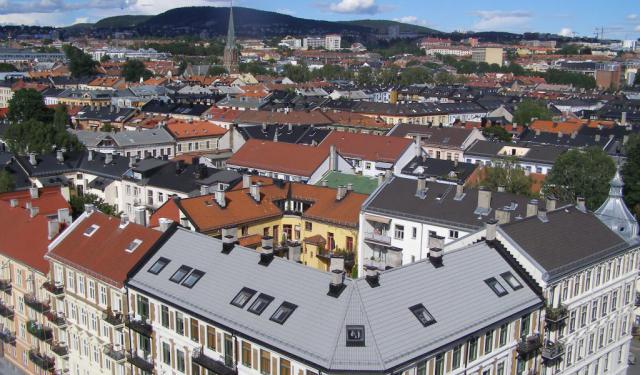 Formerly a working-class area, Grunerlokka is now one of Oslo’s hippest neighborhoods, largely owing its status to the late 20th century gentrification process. The district is named after Friedrich Gruner (1628-1674) who served as the chief administrator of Oslo (then Christiania). Today, it represents a fusion of Norwegian and foreign cultures. Other than the local street art, stylish bars, happening dance clubs and mellow cafes, there's a number of cool places of interest worth checking out in Grünerlokka. To explore the most prominent of them, follow this self-guided walk.
Image Courtesy of Wikimedia and Sean Hayford O'Leary.
How it works: Download the app "GPSmyCity: Walks in 1K+ Cities" from iTunes App Store or Google Play to your mobile phone or tablet. The app turns your mobile device into a personal tour guide and its built-in GPS navigation functions guide you from one tour stop to next. The app works offline, so no data plan is needed when traveling abroad.

The Birch Grove ("Birkelunden" in Norwegian) is a park and a green oasis in the historical Grunerlokka neighborhood of Oslo.

The area belonged to the municipality of Aker until 1858, when it was incorporated into Oslo. It was made into a park by the Norwegian businessman and philanthropist Thorvald Meyer in the 1860s. Having developed the neighborhood Grunerlokka, Meyer gave the park to the municipality in 1882. A music pavilion was added in 1926, and a small pool added between 1927 and 1928. The park also has several monuments, including a monument to the Norwegian volunteers in the Spanish Civil War.

The park is surrounded by historical buildings, mostly built in the 1870s and 1880s. The Grunerlokka School adjacent to the park went into operation in 1895, and on the west side of the park there is Paulus Church built in 1892.

In 2006 the park, school, church and fifteen blocks in the surrounding urban area was put under strict regulations, prohibiting any visible changes to the architectural environment. According to the Norwegian Ministry of the Environment, it was the first preservation of a cultural environment in a city.

The streets surrounding the Birth Grove is a great place for a stroll to admire the historical buildings in Oslo.


Image Courtesy of Wikimedia and Helge Høifødt.
Sight description based on Wikipedia.
2

Paulus Church is located in Grünerlokka in Oslo, just opposite the Birkelunden Park. It was consecrated in 1892. The church is made of brick with a front running cross-arms and has about 500 seats. The building is in German Gothic style and has a high narrow tower above the entrance facing east. Paulus Church was designed by the architect Henrik Bull in 1889, and restoration of the church were made in 1917 and again in 1972.

The Church's altarpiece is in the brown-stained pine with gold trim and divided into three. It is adorned with trumpet angels by Jo Visdalen and two altar paintings by Christen Brun. Between the two paintings are a Christ Figure in plaster made by the sculptor Gunnar Olsen Alvær in 1894. The church organ was designed by the German organ maker Albert Hollenbach for the church's consecration in 1892.
Image Courtesy of Wikimedia and Tore Sætre.
Sight description based on Wikipedia.
3

Aamodt bridge is a suspension and pedestrian bridge over the Aker River in the Oslo district of Grunerlokka. It was originally built in another location during 1851–1852 of cast iron chains made with cast iron from the Norwegian iron factory Nes Jernverk. The bridge was one of the earliest chain bridges in Norway.

Due to its poor condition, the traffic of the Aamodt bridge was diverted to a newer bridge in early 1900s. In 1952 Aamodt bridge was dismantled and moved piece by piece to its current location on the Aker River. It was intended to serve as an entrance to the Technical Museum which was planned to be built at the Aker River. However, the museum was later built elsewhere. Today the bridge is popularly used as a bicycle and pedestrian bridge.
Image Courtesy of Wikimedia and David Castor.
4

Mathallen Food Hall is the place to go for those who want a variety of dining choices. It's a good spot to sample different cuisines or to take a large group with varying appetites.

There are more than 30 shops and cafes where visitors can either dine in or enjoy al fresco eating thanks to plenty of outdoor dining.

Patrons can try choose from cuisines like Hungarian, Spanish, Southeast Asian, French, Italian and traditional Norwegian. There are also numerous places to purchase cheeses, dried meats, chocolates and drinks. There are also spots where visitors can buy food to sample now but save for later.

Mathallen Food Hall is open Tuesday through Sunday. The building rests on the banks of the Akerselva and within a short walk of Kuba Park. The pedestrian-friendly area is known for shopping and close proximity to music venue Vulkan Arena. It is also near the Kjaerlighetsstien Walking Trail, which is one of Oslo's many areas that highlight the joys of walking through the city.
Image Courtesy of Wikimedia and Helge Høifødt.
5

Sofienberg Park is a 180-acre park in northeast Oslo. The park's roots were not as a recreational structure at all but as a cemetery. It was established in 1858, but by the early 20th century the city grew to encompass the area and most of the graves were relocated to other cemeteries around the city. Out of 60,000 graves, only the Jewish Cemetery remains intact.

Sofienberg Park offers tennis tables and a playground. There are numerous picnic tables and many walking paths. One of the primary features of the park is Sofienberg Church.

The church, designed by architect Jacob Wilhelm Nordan, was consecrated in 1877. It is known for its beauty; especially the artistry of the altar and stained glass windows. The altarpiece was painted by Norwegian artist Otto Sinding. The stained glass windows were designed by painters Maria Vigeland and Enevold Thomt. Sofienberg Church is also a prominent concert venue due to its excellent acoustics.
Image Courtesy of Wikimedia and Mahlum.
6

The University Botanical Garden was founded in 1814 by the University of Oslo. The botanical garden contains more than 7,500 species of plants that are used for research and kept for conservation.

The University Botanical Garden and Natural History Museum are located in Toyen Park, west of the Edvard Munch Museum. Tourists can visit the botanical gardens free of charge any day of the week. All exhibits are free on Thursdays.
Image Courtesy of Wikimedia and Daderot.