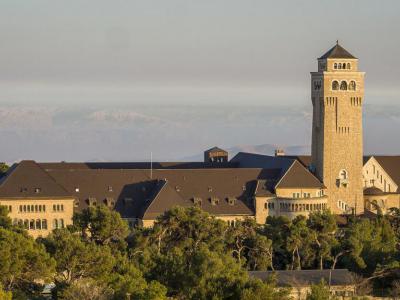 Founded in 1910 for Palestine's German Protestant community, this hospital named after Kaiser Wilhelm II's wife remains one of East Jerusalem's largest, as well as being the sole remaining specialized-care location in the West Bank / Gaza Strip. Although officially inaugurated in 1910, the construction – architecturally inspired by German palaces, such as the German Hohenzollern Castle – was only finalized in 1914; back then, it was the first building in the country to have electricity, provided by a diesel generator.

In the grounds is the Church of the Ascension, whose distinctive high square tower holding four large bells (the largest of them weighing six tons) is a landmark visible citywide and gives, in a converse manner, panoramic views over the whole city as far as the Dead Sea; should you wish to check this out, it is open to the public (Mon-Sat: 8:30am–1pm), though the lift has been out of service for a few years now so you will have to go up the stairs, which, at 60 meters high, is quite a climb. With lovely decorated domes and artwork, the church occasionally hosts choral and classical music concerts, a programme of which can be found on the website.
Image by אורי אלוני on Wikimedia under Creative Commons License.