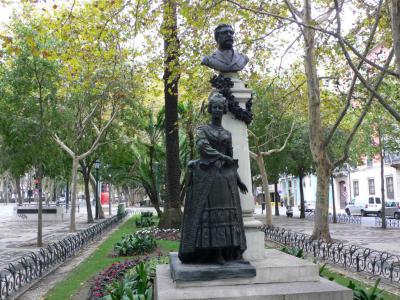 Once home to statesmen and public figures, this spacious, tree-lined pedestrian walkway leading to the squares at the heart of Lisbon has beautiful paving, designer shops, and trendy bars either side, but also small kiosks where you can get coffee/drinks/snacks and rest for a while. Between the luxurious and exclusive decadence, there are fine examples of classical 19th-century architecture and the two central plazas contain charming water features and grand statues.

Right at the beginning of the Avenida, you'll find two marble ponds, one on either side of the main way; further up there are, similarly, two fine cascades encircled by luxuriant vegetation, the waters of which come from two figures representing the rivers Douro and Tagus, while the garden plots that follow on are closed by four marble statues representing Europe, Africa, Asia and Oceania. The avenue houses two theatres, four cinemas and several cafés and confectioners; it also contains some palatial residences. During the summer months, some of the cafés spread their service up into the profusely-lit central garden-plots; this open-air service, with the music added to it, enlivens the whole atmosphere in the evenings.

The avenue's upper end (Lisbon's most expensive real estate) houses many of the city's designer shops, the likes of Armani and Louis Vuitton, and ends in a swirl of traffic at the landmark roundabout of Praça Marquês de Pombal, also known as Rotunda, right next to the city's principal park, Parque Eduardo VII, best known for its views and immense hothouses.
Image by Heather Cowper on Wikimedia under Creative Commons License.