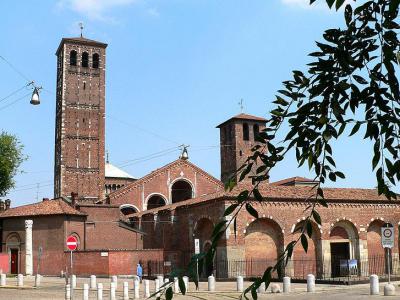 The Church of Sant' Ambrogio is a masterpiece of Romanesque architecture. It is considered to be one of the most ancient churches in Italy and one of the most historically interesting medieval buildings in Lombardy. The church was named after St. Ambrose who consecrated it in 386. When he died in 397, he was buried beside the bodies of St. Gervase and St. Protasius buried inside the Church.

Originally the church was known as Basilica Martyrum. It was a small three-aisled, transept-less church and was situated in an area where numerous martyrs of the Roman persecutions had been buried. The church was damaged in the August 1943 bombings. Architect Ferdinando Reggiori restored the building to its original form in the first half of the 12th century.

Like many Lombard churches, this one is also made of brick; the clay in this region fires to a deep red. The Old Monk's Tower dated to the 10th century whereas the Canon's Tower dated back to the 12th century. Lombard churches are also characterized by the presence of huge gable over the nave and by a tall square belfry.

Why You Should Visit:
The impressive architecture is best to be seen from afar and you won't be disappointed at entering. You won't find fancy, elaborate gilded decorations but will be able to see 6th-century columns, a 4th-century mosaic, a 10-century ciborium, medieval statues, Renaissance frescoes and a magnificent golden altar from the year 835.