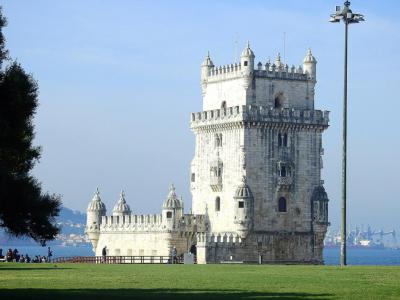 Belém Tower, officially the Tower of Saint Vincent (Portuguese: Torre de São Vicente) is a 16th-century fortification, composed of a bastion and a four-storey tower on the north side, which served as a point of embarkation and disembarkation for Portuguese explorers and as a ceremonial gateway to Lisbon.

Built during the height of the Portuguese Renaissance, the tower, commissioned by King John II, is considered one of the principal works of the Portuguese Late Gothic Manueline style. The beige-white limestone used for its construction is local to the Lisbon area and thereabouts called Lioz.

The tower stands 12 meters (39 ft) wide and 30 meters (98 ft) tall. The first-floor interior contains the Sala do Governador (Governor's Hall). On the second floor, the Sala dos Reis (King's Hall) opens to the loggia overlooking the river, while a small corner fireplace extends from this floor to the third floor fireplace in the Sala das Audiências (Audience Hall).

Since 1983, it has been a UNESCO World Heritage Site, along with the nearby Jerónimos Monastery. The tower is often portrayed as a symbol of Europe's Age of Discoveries and as a metonym for Portugal or Lisbon, given its landmark status.

Tip:
The biggest draw here is climbing to the top via a very narrow spiral staircase.
Unless you're lucky to arrive at a short line, it's best to admire from the outside garden versus investing too much time in line to enter. If you insist on getting inside, though, buy your ticket online or at a kiosk, in the adjacent park, to bypass the lengthy queue. A Lisbon Card will have you queuing with everyone else (but, at least, you won't have to pay the entrance fee!).