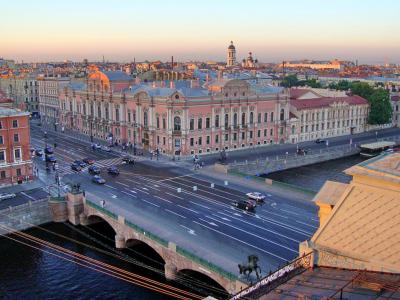 Beloselsky Belozersky Palace is a three-storied, pink-colored Neo-Baroque mansion at the intersection of the Fontanka Embankment and Nevsky Prospekt. The palace was built in 1747 during the reign of Elizabeth of Russia for Prince Mikhail Andreevitch Belosselsky, and was designed by French architect Thomas de Thomon.

Following its major renovation in 1847-1848 by Andrei Stackenschneider, new wings were added to the building and figures of atlases and caryatids placed at the façade, upon which the palace gained a reputation of one of the most opulent in Russia. Largely responsible for its sumptuous appearance was Princess Elena Pavlovna Belosselskaya-Belozerskaya. The palace also became the venue of the most lavish balls and concerts in St. Petersburg.

During World War I, the palace housed a voluntary British Red Cross hospital set up to treat Russian soldiers. It was staffed by British doctors and nurses, and was led by Lady Muriel Paget and Lady Sybil Grey. Shortly after the Revolution of 1917, the property was nationalized.

Unlike many other similar structures, the palace had survived the Soviet rule virtually intact, used as the Regional Soviet Council and the Communist Party District Headquarters until 1991. During World War II, the Rococo interiors sustained considerable damage, but were restored to the original state in 1954.

Nowadays, opulence and beauty abound everywhere on the premises: gorgeous wetlands, a beautiful staircase, silk-lined rooms, carved walls, and cherub bas-reliefs. Inside there's a wax museum, an art gallery, and a concert hall for chamber music.

Tours of the palace are available from noon to 6 pm daily.
Image Courtesy of Олеся Л..
Sight description based on Wikipedia.