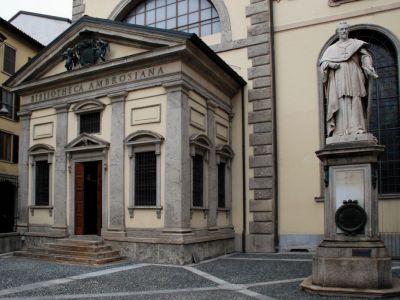 Biblioteca Ambrosiana is a historic library named after Ambrose, the patron saint of Milan. The building was constructed in 1603 to house the collection of 15,000 manuscripts and printed books gathered by Cardinal Federico Borromeo. Upon its foundation in 1609, the cardinal donated his entire collection of paintings and drawings to the library.

***Leonardo da Vinci's Masterpieces Tour***
Shortly after the cardinal's death, the library acquired a twelve-volume set of drawings and manuscripts by Leonardo da Vinci, known as Codex Atlanticus, created between 1478 and 1519. This is the largest collection of Leonardo’s writings on practically every area of human knowledge: mechanics, mathematics, astronomy, botany, geography, physics, chemistry, architecture and philosophy. It also contains the artist’s drawings, sketches and fables. For conservation purposes, the display of 22 files in the Federiciana Hall rotates every three months.

Part of the library is the famous Pinacoteca Ambrosiana, the art gallery, featuring da Vinci's "Portrait of a Musician", Caravaggio's "Basket of Fruit", as well as Raffaello's life-size, pencil and carbon sketch of the "The School of Athens", a full-color final version of which is displayed in the Vatican.

Among other major acquisitions here are Islamic manuscripts, 11th-century diwan of poets and the oldest copy of the 'Kitab Sibawahaihi', plus a complete set of manuscripts from the Benedictine monastery of Bobbio (1606) and those from Vincenzo Pinelli of Padua, comprising more than 800 pieces, including the famous Ilias Picta (Ambrosian Iliad).

Back in the day, the library also had its own printing press, and housed a school of classical languages. The building suffered damage during World War II resulting in the loss of the opera libretti archives of La Scala. It was restored in 1952 and underwent further major renovation in 1990–97.

Why You Should Visit:
A chance to see art restorers at work on peculiar Renaissance masterpieces, and in a brilliant building too.

Tip:
On a weekday, you can practically have the entire place to yourself.
The provided map/guide is quite clear, with all the main highlights identified, but if you're pressed for time, taking a guided tour is advisable.
Apparently, there's also a paid audio guide (English/Italian) that offers some interesting insights into each room and displayed artworks.