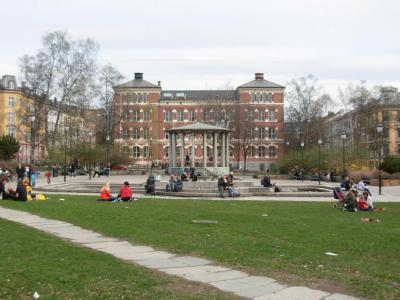 The Birch Grove ("Birkelunden" in Norwegian) is a park and a green oasis in the historical Grunerlokka neighborhood of Oslo.

The area belonged to the municipality of Aker until 1858, when it was incorporated into Oslo. It was made into a park by the Norwegian businessman and philanthropist Thorvald Meyer in the 1860s. Having developed the neighborhood Grunerlokka, Meyer gave the park to the municipality in 1882. A music pavilion was added in 1926, and a small pool added between 1927 and 1928. The park also has several monuments, including a monument to the Norwegian volunteers in the Spanish Civil War.

The park is surrounded by historical buildings, mostly built in the 1870s and 1880s. The Grunerlokka School adjacent to the park went into operation in 1895, and on the west side of the park there is Paulus Church built in 1892.

In 2006 the park, school, church and fifteen blocks in the surrounding urban area was put under strict regulations, prohibiting any visible changes to the architectural environment. According to the Norwegian Ministry of the Environment, it was the first preservation of a cultural environment in a city.

The streets surrounding the Birth Grove is a great place for a stroll to admire the historical buildings in Oslo.
Image by Helge Høifødt on Wikimedia under Creative Commons License.
Sight description based on wikipedia