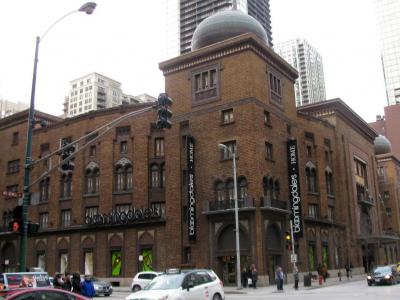 Originally a Shriner's Temple with an ornate three-level auditorium, the Medinah Temple is a beautiful, elaborate example of Moorish Revival architecture. Besides its pointed, bulbous domes and horseshoe arches that reflect the Islamic influence so popular in the design of many Shriner's Temples, many of the key elements – including the intricate geometric patterns around the windows and doors – remind of mosques and palaces usually to be found in Spain.

After giving home to some of the Chicago Symphony Orchestra's most famous recordings from the late 1960s through the 1980s, this Chicago landmark has been repurposed and today houses a Bloomingdale's home store. Although the interior was gutted to create space for retail displays, the dome was restored and the stained glass windows and exterior were repaired to keep the original building's character intact.

The home store is sleek and well organized, with a spacious layout and beautiful crystal and other great items for the kitchen/dining room, but even if you don't plan to shop here, it is a nice place to have a meal or some nice hot tea from the T2 display, and enjoy exploring the nooks and crannies that lead to the stained glass windows.

Tip:
The 2nd-floor women's restroom may pique your interest, as it boasts the title of Chicago's most beautiful bathroom.