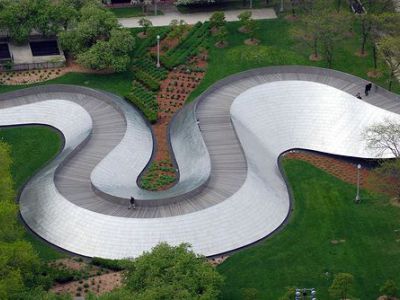 The BP Pedestrian Bridge is a girder footbridge at Chicago's Grant Park running over the Columbus Drive between Daley Bicentennial Plaza and Millennium Park. Contrary to what one may believe, the BP abbreviation in the name has nothing to do with “Bicentennial Plaza” but stands for the energy giant British Petroleum which donated $5 million toward the bridge construction. Opened on July 16, 2004, the same day as Millennium Park, BP Bridge is a brainchild of the Pritzker Prize-winning architect Frank Gehry, who also designed the neighboring Jay Pritzker Pavilion. Gehry was the only candidate considered for this project and agreed to work on it only after the Pritzkers had come up with the funding. Curving like a snake, the BP Bridge is designed to bear a heavy load without structural problems caused by its own weight. Generally praised for its aesthetics, the bridge has received award for the use of sheet metal – stainless steel plates – expressing biomorphic allusions quite typical of Gehry's style.

Why You Should Visit:
On a beautiful day, this is one of the most picturesque walks you can take in Chicago!
The wide curvy path provides continuous opportunities to enjoy the city skyline and lake view, as well as the nice views of both Millennium Park and Maggie Daley Park.
Image by Maricel on Wikimedia under Creative Commons License.
Sight description based on wikipedia