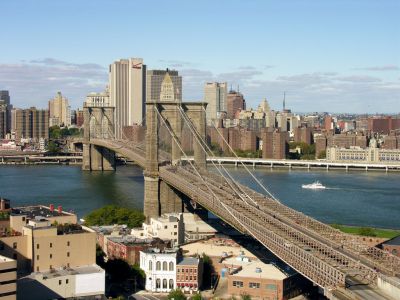 When the Brooklyn Bridge was dedicated in 1883, it was the largest suspension bridge in the world and regarded at the time as the 8th wonder of the world. The bridge connects the boroughs of Manhattan and Brooklyn over the East River.

The design of the Brooklyn Bridge was drawn up by John Augustus Roebling who had previously planned other smaller suspension bridges. Construction began under the supervision of his son Washington Roebling and was later overseen by his daughter-in-law Emily Roebling. It was completed in 1883. The bridge opening was a grand ceremony attended by prominent statesmen like President Chester A. Arthur and the New York Mayor, Franklin Edson. Emily Roebling was the first person to cross the bridge, followed by 1,800 vehicles and 150,300 people going across from Manhattan to Brooklyn on the first day.

The Brooklyn Bridge has carried a range of vehicles from horse-drawn carriages to modern automobiles in its lifetime. Earlier, trolleys and elevated trains crossed it, and today there are six lanes for automobile traffic. Commercial vehicles and buses are prohibited from using the bridge because of the height and weight restrictions. Visitors can take a stroll on the separate walkway in the center lane of the bridge for breathtaking views and to admire the brilliant skills that went into making this amazing feat of engineering.

Why You Should Visit:
A great walk to view the Manhattan skyline and soak up the atmosphere of New York City.

Tip:
Stay to the one pedestrian side while walking, or if you're biking, to the one biker side. The lanes get really narrow at certain points (it is an old bridge), so if you're walking, you don't wanna get hit by a bike!
That aside, do a little research about the Brooklyn side before you go, because there are some excellent and modestly priced restaurants there that don't get much press.
Image by CPacker on Wikimedia under Creative Commons License.
Sight description based on wikipedia