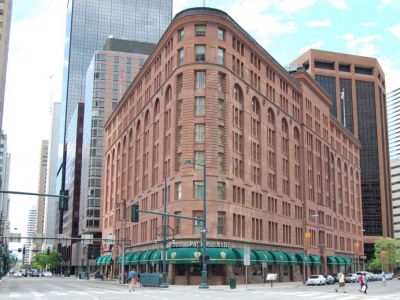 The Brown Palace Hotel was built in 1892 in the Italian Renaissance Revival style. This hotel designed by architect Frank Edbrooke, whose desire was to craft an entirely fireproof building. The construction of steel and cement covered in sandstone was Denver's tallest building when it was completed.

The hotel is known for its distinctive triangular shape, large murals and the stained-glass ceiling in the atrium. It is a popular spot for tourists because of its historic significance and unique design. Those who wish to stay in the hotel can find luxury rooms, a spa and salon, six restaurants and two bars. Live entertainment is often available throughout the hotel.

The Brown Palace Hotel has seen its share of famous faces. Numerous presidents have stayed at this hotel, including Dwight D. Eisenhower, Bill Clinton, Ronald Reagan and Harry S Truman. The hotel also hosted The Beatles in 1964. Since then, a room has been converted into the Beatles Suite. It contains a custom Beatles jukebox, framed records and photos of the Fab Four.
Image by Onetwo1 on Wikimedia under Creative Commons License.