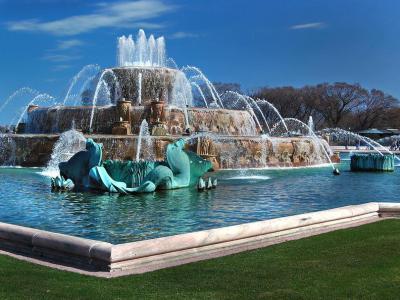 Buckingham Fountain is a major landmark considered to be Chicago's front door due to its location in Grant Park, the city's front yard, at Columbus Drive and Congress Parkway. The fountain was dedicated in 1927 and was designed by Jacques Lambert. Its body of water represents Lake Michigan, whereas each sculpted seahorse therein symbolizes a state bordering the lake. The design of the fountain was based on the Bassin de Latome and modeled after Latona Fountain at Versailles. The fountain runs from 8:00am to 11:00pm every day between mid-April and mid-October. During a 20-minute water display that runs every hour on the hour, the center jet shoots up to 150 feet (46 m) in the air. At dusk, a light and music show coincides with the water display. The last show of the night begins at 10:00pm.

Why You Should Visit:
Set against the Chicago city skyline in the background, this fountain forms quite a sight – one of the greatest photo op spots in the city.
Also, the water goes higher than just about any other fountain you've ever seen!

Tip:
Remember that the fountain is shut down for winter months.
Otherwise, enjoy the light show after dark!