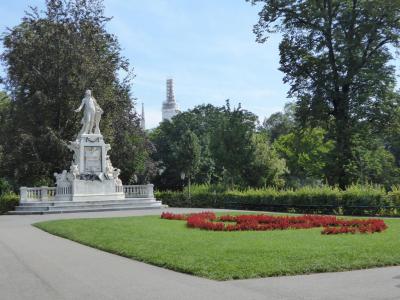 The Burggarten is located in Vienna’s 1st district. It was originally a garden on the grounds of the Hofburg Palace. The space was originally partially occupied by a wall that surrounded the palace and the city to protect against invaders. However, it did little to stop Napoleon’s advance upon the city and as he left portions of the wall were destroyed.

In the space where the wall had been, a beautiful formal garden in the English tradition was created on the palace grounds. After the fall of the Habsburg dynasty, the garden was opened for public enjoyment.

Several statues are on the garden grounds, but the most famous one is the Mozart Denkmal that was moved there in the early 1950s. Also be sure to see the fountain statue of Hercules that was placed in the pond in the 1940s.

Another popular feature is the butterfly garden (Schmettlerlinghaus) which was added in 1901. Tropical butterflies and bats live in a tropical paradise here. It is educational as well as beautiful; one can see the butterfly eggs, caterpillars, cocoons and butterflies all in one building. The free-flying butterflies are spectacular and sure to please everyone.

Why You Should Visit:
Cool, cozy little place to park off and enjoy the sun after a long walk in the Old City.

Tip:
Combine with a refreshment stop at the fabulous Palmenhaus café overlooking the garden!