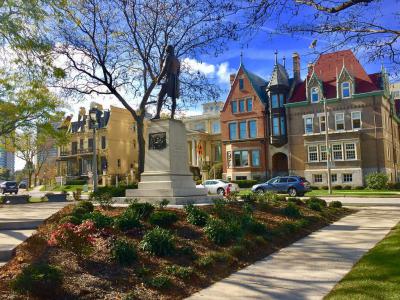 Burns Commons Park was established in 1847. Initially it was named Franklin Square. After the statue of Robert Burns was installed in the park its name changed to Burns Commons Park. Today it houses not only to the statue of the grand poet Robert Burns but also the Cleopatra's Wedge sculpture. The park may well be considered an oasis surrounded by condos and buildings.
Image Courtesy of Wikimedia and Maximilian77.