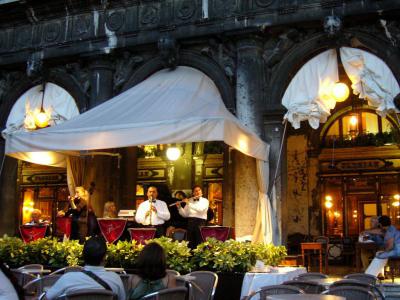 Opened in 1720 by Florian Francesconi and called by Napoleon "one of the world’s most beautiful drawing rooms", Caffè Florian is the oldest coffee house in continuous operation in Italy and the second oldest in the World (after Café Procope in Paris). Due to its prestigious position, it is almost a symbol of Venice; the meeting place of artists and poets, writers and politicians, including Wagner, Goethe, Lord Byron and also Casanova, who favored the Caffè Florian because it was the first establishment to permit the entry of women (whom he was always so eager to court).

Here, surrounded by local history, one can enjoy an amazing range of cakes and coffees, expensive and served by well-dressed waiters to tiny marble tables for two. The pleasure you get is definitely worth it; however, when the resident musicians are serenading (which is one of the reasons why you'd choose the caffè in the first place) be prepared for an additional €6 per person to be tacked onto your bill. The mood is calm and relaxing (other than the occasional birds that may come and harass) and you can request songs from the musicians.