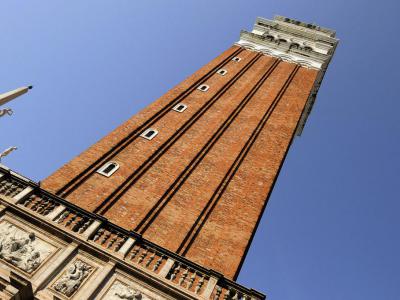 The city’s tallest bell tower was originally constructed in the 12th century, as a combined lighthouse and belfry, and was continuously modified up until the 16th century, when the golden angel was installed on its summit. Back in the day, each of the five bells here had a distinct function: the largest bell tolled the start and the end of a working day; another bell rang midday; two other bells either proclaimed a session of the Senate or called members of the Grand Council to the meetings; while the smallest of the bells gave notice of a forthcoming execution.

It was at the top of this belfry that Galileo Galilei famously demonstrated his telescope to the Venetian Doge on 21 August 1609 – the event commemorated by a plaque at the tower's observation deck. Still, the most dramatic event associated with the Campanile took place on 14 July 1902, when the tower fell down shortly after giving a sound of warning to the leisurely coffee drinkers at piazza below, sending them run for their lives!

The Venetians put the Campanile back “where it was and how it was”, and the tower is now safe to climb to the very top. Unlike other belfries where you have to brave a narrow, steep spiral set of stairs to reach the top, the Venetian one has an elevator so you can easily get a pigeon’s eye view just for a fee.

Standing 99 meters high, the Campanile is the tallest structure in Venice; an ideal vantage point for observing the cupolas of the San Marco basilica and further afield, including the surrounding lagoon. Sometimes in the evening, the view is so clear that one can literally see for miles away! But even if you don't reach the top, standing at the base of this historic belfry and staring up at its summit can be just as exciting an experience.
Image Courtesy of Flickr and Son of Groucho.