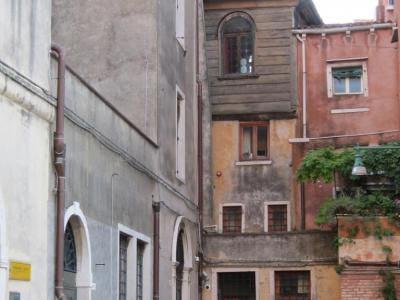 The Canton Synagogue is recognizable by the tiny wooden room with a small, rounded turret on its top. Named either after the family that had it built or after its position in the “canton” (Venetian = corner) of the Ghetto Square, this is the 2nd synagogue in Venice to be built, in the 1530s, with the financial support from Germans, French, and Swiss Jews. It was then enlarged and enriched in the 18th century, so its decorations are reflective of the Baroque era. Above the entrance portal one can read: “Year of the construction of the Holy Community Canton Synagogue 5292 (1532)”.

At the head of the stairs, in the first doorway, a tablet reads: “Free yourself, mortal, from evil desires when to the Temple you move your foot to pray think whom you are praying to and with devout faith turn your mind to your Divine Subject”. Above the second doorway there is a verse from Salomon’s Proverbs: “Blessed is the man that heareth me, watching daily at my gates”. Similar to the Scola Grande Tedesca, this synagogue, too, follows the Askhenazi rite.
Image Courtesy of Wikimedia and Ladislav Faigl.