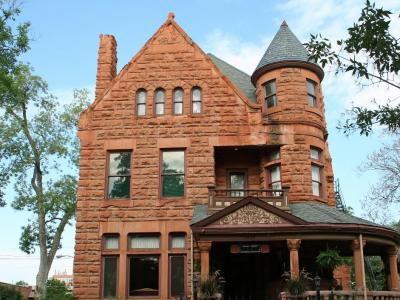 The Capitol Hill Mansion was built in 1891 in the Richardsonian Romanesque architectural style. The exterior of the home is made from locally sourced, Manitou sandstone. The exterior displays Gothic features, Corinthian columns and Victorian-era turrets.

The original residents of the home were Jeffrey and Mary Keating. Mary Keating was a prominent Denver socialite while Jeffrey was a highly influential real estate developer. It has gone through many changes over the years, from private home to hotel to apartments. It is now operated as a bed and breakfast.

The interior of the Capitol Hill Mansion retains most of its original furnishings, such as stained glass windows, oak paneling and a large, marble fireplace.

The Capitol Hill Mansion is located southeast of the Colorado State Capitol, about halfway between Civic Center Park and the Governor's mansion. Tourists will see a number of historic homes as they explore the area, but the conical roofs and turrets of the Capitol Hill Mansion stand out from among the others.
Image Courtesy of Wikimedia and Jeffrey Beall.