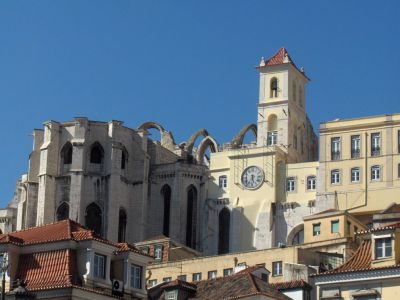 The Carmo Convent that was home to Carmelite nuns was ruined by the devastating earthquake that shook Lisbon in 1755. The ruined structure stands atop a hillock overlooking the busy Rossio Square and faces the Lisbon Castle Hill. A well-known knight, Nuno Álvares Pereira, who was the Supreme Commander of the Army next to the King commissioned the building of the Carmo Convent in 1389. Carmelite nuns from Moura in southern Portugal were its first residents. At the time it was the largest convent in Lisbon. After the earthquake, the ruined Gothic structure was put to many uses. It became military barracks and later wood was stored in the building.

During the Carnation Revolution, it was the place of refuge of Marcelo Caetano, the successor of the dictatorial president, Antonio de Oliviera Salazar, and those loyal to him. He was later deposed, ending over half a century of authoritarian rule in Portugal. Today, the nave and apse of the Carmo Church are the setting for a small archaeological museum, with pieces from all periods of Portuguese history. The nave has a series of tombs, fountains, windows and other architectural relics from different places and styles. The old apse chapels are also used as exhibition rooms. One of them houses notable pre-historical objects excavated from a fortification near Azambuja (3500–1500 BC).

Why You Should Visit:
Beautiful remains, perfect for pictures against the blue sky, but fascinating to experience during the sunset as well.
A charming and novel way to appreciate architecture, history and art in one setting.
There are lots of interesting artifacts inside with a sense of local history.
You also have a terrace right behind and the view is breathtaking!

Tip:
If you're looking for a way to get back down the hill into Lisbon your best bet is to take the Santa Justa elevator which can be accessed by a footbridge through the Bellavista restaurant just to the right of the convent.