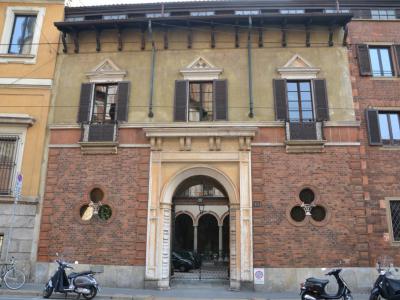 Casa Atellani or Casa degli Atellani (Atellani House) is a 15th-century palace in Milan. It was built during the rule of Ludovico Maria Sforza, known as il Moro, regent of the Duchy of Milan, who granted numerous building permits to his courtiers and collaborators, thus wishing to make the road axis of the ancient village of Porta Vercellina a prestigious outline of the newly-built church of Santa Maria delle Grazie. Having bought the palace in 1490 from the Landi counts of Piacenza, the Duke donated it to the Atellani family, his courtiers. The palace became famous for the parties organized by the owners, described in many chronicles of the time, which brought together major personalities of the Sforza court.

Alongside frescoes, coats of arms and paintings dating back to the 15th century, the palazzo’s rooms also showcase neoclassical elements from the 1920s restoration performed by iconic architect Piero Portaluppi. Sadly, the palace was badly damaged by air raids during World War II.

Its magnificent garden, however, home to the famous Leonardo’s Vineyard, has survived. While working on The Last Supper mural, Leonardo da Vinci stayed in Casa Atellani. The Duke gifted the property’s vineyard, a rectangular plot of 60x175 meters, to the artist in 1498 in recognition for his talent. Coming from a family of winemakers, Leonardo treasured the gift and remained emotionally attached to it long after he left Milan.

On the occasion of Expo 2015, Leonardo’s Vineyard was re-planted. The replanting was carried out in collaboration with the University of Milan based on the DNA analysis of the remains of the vines – Malvasia di Candia Aromatica, a white grape popular in the Renaissance period – found there during excavation. This was done in a bid to reproduce the wine that Leonardo himself may have sipped.

Visiting the vineyard is undoubtedly one of the highlights of a trip to Da Vinci's Milan. If you want to see it, you need to book in advance.
Image by Carlo Dell'Orto on Wikimedia under Creative Commons License.
Sight description based on wikipedia