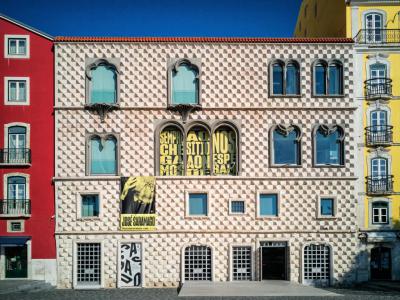 Casa dos Bicos (Portuguese for House of the Beaks/Spikes) is a historical house built in the early 16th century in the Alfama neighborhood, with a curious façade covered with 1,125 diamond-shaped stone spikes. Modeled after the Palazzos of Venice with Portuguese-style Manueline arched windows, it was of the very few buildings to survive the terrible 1775 Lisbon earthquake, but over time was abandoned as a residence and used as a warehouse. After a 20th-century renovation, it became the headquarters of the José Saramago Foundation and a location of the Museum of Lisbon.

The ground floor, which is free to enter, is completely dedicated to an archaeological site, which is a must-see in this corner of Lisbon, especially since there is lots of information in English. The upper floors are a paid area dedicated to the life and public works of Portuguese writer / Nobel Prize recipient, José Saramago, while the outside area is a sort of memorial for the brilliant writer, who doesn't have a grave; his ashes are buried under the old olive tree right outside the building.

Tip:
Please note the huge elephant footprint – a tribute to one of Saramago's most famous books, "The Elephant's Journey".
Take care to also note the slight exterior differences between the older bottom two floors and the newer top two floors.