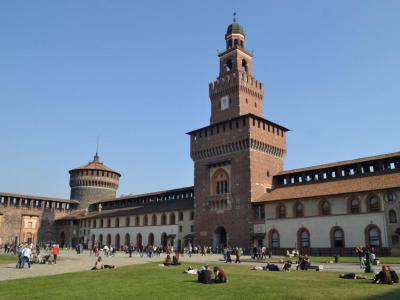 Castello Sforzesco, one of the biggest fortresses in Europe that once housed the Duchy of Milan, today is a home to several museums and art collections. First built in the 14th century, the castle has survived numerous battles, invasions, sacking and destruction throughout its history. One of its famous towers, the Filarete tower, used to store ammunition. In 1521, a lightning rod hit the structure, causing explosion of all the ammunition inside. The blast left many casualties and destroyed the entire fortress.

The Sforzesco had endured several restorations until the assault by Napoleonic troops in 1796. That attack caused severe damage to the old fortress. Napoleon then decided to demolish the external structure and use the castle as quarters for his troops. The frescoed rooms at the ground floor of the Corte Ducale were even used as stables.

Following the Unification of Italy in the second half of the 19th century, architect Luca Beltrami carried out complete reconstruction of the old fortress. The castle was given back to the city of Milan in 1905 and became a major center of art and culture with seven distinct museums open to the general public.

***Leonardo da Vinci's Masterpieces Tour***
The castle rooms are originally decorated with intricately detailed works of art, the most famous of which is the elaborate ceiling fresco in the great hall, the Sala delle Asse, by Leonardo da Vinci. The Sforza family, Leonardo's patrons, commissioned him to do the job. The painting depicts a garden pergola with 16 mulberry trees bound together by a golden rope.

Why You Should Visit:
Each room herein is a treasure, not only for the exhibited items, but also for the ceiling frescoes which are wonders in their own right.
Entrance to the castle is free, so if you're on a budget, just walk through and admire the courtyards and architecture. As for the "all museums" fee, it is quite reasonable.

Tip:
Exploring the entire Castello Sforzesco, complete with its gardens, may take a few days.
Try to go on Tuesday around 2pm to get free entry (entry on the 1st and 3rd Tuesday of every month is free for all public museums).
There's no way to access the battlements or the "inside" (aside from the museums) except by a guided tour – consider booking one in advance for that.