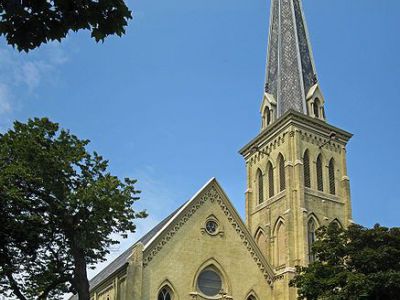 Cathedral Church of All Saints, Milwaukee

The Cathedral Church of All Saints is the bishop's church of the Episcopal Diocese of Milwaukee. The current parish is a descendant of a small mission by the Right Reverend Jackson Kemper. It is located in Milwaukee's downtown Yankee Hill neighborhood.

The Gothic Revival church building was designed by E. Townsend Mix, a noted Milwaukee architect, and constructed as Olivet Congregational Church in 1868. The building was sold to the Episcopal diocese in 1871 when the Olivet congregation faced bankruptcy, and was consecrated as a cathedral in 1898. The cathedral complex, which includes the church, an attached guild hall and nearby bishop's manse, is listed on the National Register of Historic Places and was designated a Milwaukee City Landmark in 1973.

The tower and steeple, approximately 200 feet tall, houses a bronze bell cast in Pittsburgh, Pennsylvania in 1867, one year before the church was built. It measures almost 40 inches in diameter at the mouth, weighs approximately 1,200 pounds and is tuned to an A. Since renovation in the 1950s the steeple cross is mounted out-of-line with the facade, slightly angled towards Lake Michigan. The Sienna marble altar and triptych was designed and built by Eugene W. Mason, Jr. of New York City, and is of Italian Gothic styling. Most of the stained glass windows in the cathedral were designed and produced in England, most by Lavers and Westlake of London. Today's church features a liturgy in the Anglo-Catholic tradition. The congregation is small, including only around 250 members.
Image Courtesy of Wikimedia and James Steakley.
Sight description based on Wikipedia.