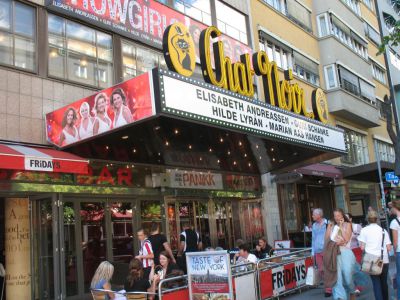 Chat Noir (French for "Black Cat") is a cabaret and revue theatre in Oslo, Norway. It was established in 1912 by Bokken Lasson. The current director is Tom Sterri. Chat Noir was established as a cabaret in 1912 by singer Bokken Lasson and her later husband, writer Vilhelm Dybwad, modelled after the Paris cabaret Le Chat Noir from the 19th century. During a visit to Paris in the early 1890s Bokken Lasson had found the inspiration of her life. She experienced the literary cabarets of the time, and performers such as Yvette Guilbert. The next years she toured European cities, wearing a self-composed costume, singing gypsy songs and playing lute, performing on the street, at restaurants, cabarets and occasionally in musical comedies. Chat Noir opened in the Tivoli building and Bokken Lasson managed the cabaret from 1912 to 1917. Chat Noir became a cultural meeting place, with the artists Christian and Oda Krohg (Bokken's sister) as leading figures. Their son Per Krohg painted the first decorations. To begin with Chat Noir was a literary cabaret. Herman Wildenvey and Arnulf Øverland contributed with poetry, Vilhelm Dybwad composed melodies, and Bokken Lasson was singing. In 1913 the first revue, called 1913, was played at Chat Noir. In 1916 Lalla Christensen was introduced, singing children's songs. Lalla – later married Carlsen – was engaged at Chat Noir until 1947, and came to be one of the most popular revue artists in Norway.
Image by Kjetil r on Wikimedia under Creative Commons License.
Sight description based on wikipedia