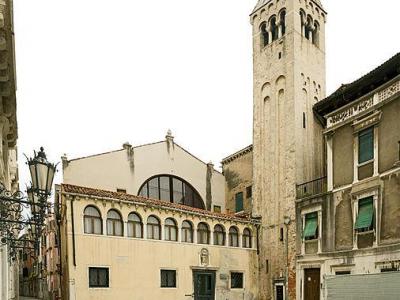 San Samuele is very effectively positioned in the eponymous campo, between the Grassi and Malipiero palaces, thus counting among the few churches in Venice that overlook the Grand Canal.

Housing relics attributed to the Biblical Samuel, the church bears the distinction of being one of only a handful of Venetian churches dedicated to an Old Testament prophet rather than a Roman Catholic saint. It is also unique in that its late-Gothic apse has remained intact despite the restructuring of its nave and facade in 1685. The walls and vaults of this apse have been restored starting in 1999, and are one of the few surviving fresco cycles of early Venetian Renaissance.

The very impressive, monumental bell tower in white Istrian stone stands thirty meters high and – although partially incorporated into a nearby house – is certainly among the most beautiful in Venice.

Although still used for worship, San Samuele is quite difficult to actually find open. A favorable opportunity would be on the occasion of the Biennale, when it displays additional elements beyond those historical and religious, which remain considerable.

***CASANOVA TOUR***
This is the parish church where Giacomo Casanova's parents wed in 1724, where he was baptized one year later, where he attended church services as a child, and to which he was eventually assigned as a teenager, applying himself to advanced classes in the Italian language and in poetry taught by the Abbot Schiavo.

On February 14, 1740, as he approached his fifteenth birthday, he was tonsured by the Patriarch of Venice as a sign of humility, and shortly afterwards he delivered his first sermon to a delighted audience at the church. Despite this, the profane world held a greater fascination for him than Latin texts or theological conundrums. He saw no reason to choose between the love of God and the love of women. Before long, a thick thatch of hair or wig obscured Casanova’s priestly tonsure, and his cascades of passion continued unabated. Eventually, while launching into his second sermon, his head clouded with wine drunk in the company of aristocrats, he forgot his words and dropped to the floor fainting. Disgraced, he renounced being a churchman and fled to Padua, where he diligently pursued his studies and received his law degree.
Image by Didier Descouens on Wikimedia under Creative Commons License.