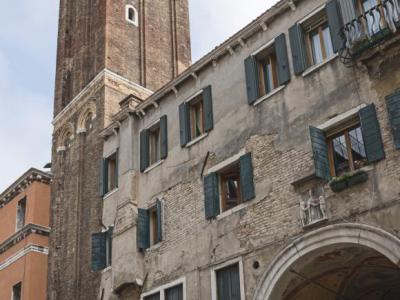 Founded in 1071 and then rebuilt in the 16th century by Antonio Scarpagnino after a fire that destroyed most of the Rialto market area, this small church is one of the most interesting examples of Renaissance architecture. Its altarpiece is made by Titian, depicting San Giovanni Elemosinario (or St John the Almsgiver, the 7th-century Patriarch of Alexandria), while one of the side chapels has a harmonius altarpiece by Il Pordenone, Titian's great rival, depicting an athletic and monumental San Sebastiano, (splendid in his almost nakedness), a florid and absorbed Santa Caterina with eyes to the sky, and a spontaneous San Rocco, showing a healthy leg that got healed from the bubonic plague. Meanwhile, in the left aisle, there is a fragment of a bas-relief dating from the Middle Ages, representing the Night of the Birth of Christ.
Image Courtesy of Wikimedia and Didier Descouens.