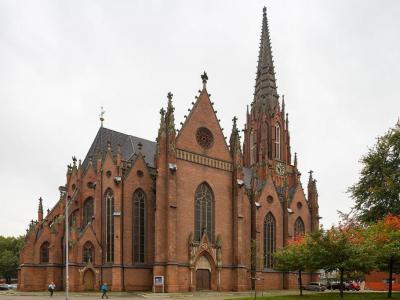 The church also features an immense spire, which was damaged during World War II air raids. Damage from the war was restored in 1951 with funds that were collected among the congregation. Further renovation of the spire and the roof was undertaken in 1988. You enter the church through the large buttresses above which is a gable and rose window. In recognition of the importance the Christuskirche plays in the spiritual minds of the people of Hannover, the church was used for several events during the 2000 Expo. There are evensong services held during the week along with regular Sunday services, which are open to the public. Visitors are free to visit the church outside of service times and there are often volunteer guides to take you around.
Image by Tim Schredder on Wikimedia under Creative Commons License.