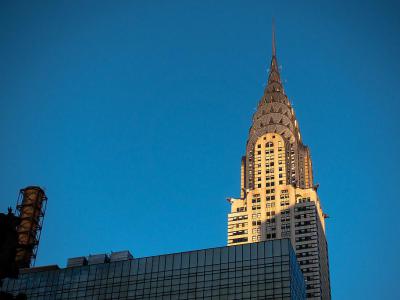 For almost a year (11 months) prior to the completion of the Empire State Building, the Chrysler Building enjoyed the status of the world's tallest skyscraper. It was erected at an enormous rate of four floors a week, but despite the haste, no incident or accident occurred during the construction.

Commissioned by the automobile magnate Walter P. Chrysler, the skyscraper was designed by architect William Van Alen in 1928, and was meant to house the headquarters of the Chrysler company – hence the ornamentation in the lower floors, featuring steel automobile parts. Regarded by many well-known contemporary architects as the most beautiful structure in New York City, the building features art deco style with gradually decreasing steel arches studded with triangular windows. At 319 meters high and with 77 floors topped by a 38-meter spire, this is the highest steel-supported brick structure in the world. Initially, there was a viewing gallery on the 71st floor which was then closed in 1945. The marble-clad lobby has a mural in the ceiling, showing an automobile assembly line.

The Chrysler Building remains New York's best-loved skyscraper and was ranked 9th in the survey of the Favorite Architectural Memories in the US, ahead of many well-known landmarks, like the now destroyed World Trade Center. In 1976, the Chrysler Building was declared a National Historic Landmark.

Why You Should Visit:
Art-deco icon that looks good from any vantage point, but well worth a detour to take a closer look.

Tip:
If time is in shortage, just walk into the lobby to see the beautiful walls and floor. The ceiling is a unique work of art.
Image Courtesy of Wikimedia and Billie Grace Ward.
Sight description based on Wikipedia.