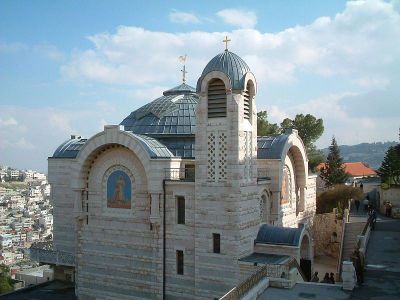 Around five minutes walk from the Zion Gate, on the slopes overlooking the City of David, this church commemorates the site where Jesus is believed to have been imprisoned by the High Priest Caiaphas, and where Peter famously denied knowing him, thus fulfilling the prophecy, "Before the cock crow, you shall deny me thrice" (Matthew 26:34). As it happens, the Latin term "gallincantu" stands for "cock-crow" and, fittingly, atop the church is a rooster to remind of the event.

Raised in 1931 on the former site of Byzantine and Crusader structures, the pretty white stone church looks rather modern, but below ground are ancient grottos where Peter and John were allegedly held for preaching at the Temple following the Resurrection; also, nearby underground, the "Sacred Pit" uncovered in 1889, where Christ is said to have been held overnight while awaiting trial before Pontius Pilate. A visit here is very sobering, especially to see the iron loops and whittled out holes in the rock from which rope would have hung and the prisoners strung up.

Among other archaeologic finds upon the church grounds in an ancient staircase running down the mountain slope and covered in mosaic – many Christians believe Jesus walked down these "Holy Stairs" the night of his arrest. The large model of what Jerusalem may have looked like in Byzantine times is worth a few minutes as well.

The modern church is decorated in blue, with large, multi-colored mosaics portraying figures from the New Testament and a beautiful ceiling dominated by a huge cross-shaped window designed in a variety of colors. A well-stocked gift shop, clean bathrooms and small cafe are also located on the property.