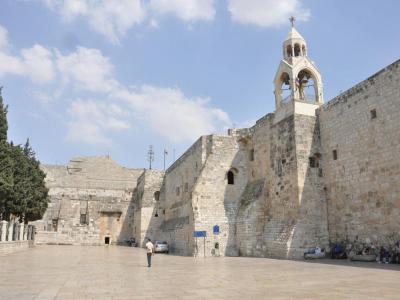 Church of the Nativity, Jerusalem (must see)

10 km south of Jerusalem, this site in Bethlehem has been identified by Christian tradition as the birthplace of Jesus since the 2nd century. In 325 AD, Roman Emperor Constantine built a chapel over the Grotto of the Nativity making it the oldest church in the Holy Land currently in use. Although the original basilica perished in fire, it was rebuilt in the 6th century, courtesy of Emperor Justinian, and then was renovated again in the 11th century by the Crusaders who retained the elaborate floor mosaics from the original building.

The central doorway shows the overlap of styles centuries apart, featuring the original door surround and the relief-decorated architrave of Justinian's church. The Crusaders reduced the size of the entrance, inserting a doorway with a pointed arch and walling in the upper part of the original one. Later, the doorway was further reduced in order to prevent the Mamluks from riding in on their horses. As a result, the entrance now measures only 1.2 meters high so that whoever comes in must bend down. Overall, the Nativity site represents a complex incorporating Latin, Greek Orthodox, Franciscan and Armenian convents and churches, as well as bell towers, terraced gardens and a pilgrimage route.
Image by Neil Ward on Wikimedia under Creative Commons License.